When you hear the word “blockchain,” your mind may race to an image of the cryptocurrency Bitcoin. When federal IT officials hear it, they likely think of the words “efficiency” and “security.”

Blockchain, the digital ledger system that enables cryptocurrencies, has the potential to streamline and secure a host of government operations, from accounting to supply chains. The Treasury Department and General Services Administration are proponents of blockchain, but other departments and agencies are exploring its uses as well.

It’s still early days in terms of adoption across the government, but blockchain could enhance the security of government transactions and accounting, and potentially replace database technology.

So, what is blockchain? IBM, a major blockchain proponent, helpfully explains it for the uninitiated:

The two concepts underpinning blockchain are “business network” and “ledger.” Taken together, these are what make blockchain a smart, tamper-resistant way to conduct trade, transactions and business processes. Network members exchange assets through a ledger that all members share access to. The ledger is synced across the network with all members needing to confirm a transaction of tangible or intangible assets before it is approved and stored on the blockchain. This shared view helps establish legitimacy and transparency, even when parties are not familiar with one another.

Mark White, chief technologist at Deloitte Consulting, tells Federal News Radio that blockchain users know their ledgers are correct because they come with cryptographic signatures that certify they are correct. “It’s the same as a notarized document, but you can access it freely from wherever you are,” he says. “You can then distribute it digitally for whatever purposes.”

The Treasury Department wants to use blockchain to improve efficiencies in internal accounting and control operations, John Hill, assistant commissioner of financial innovation and transformation at the department’s Bureau of the Fiscal Service, tells Federal News Radio. Blockchain could perform the functions of a database more effectively, he says.

Instead of always reconciling against a central ledger, blockchain would distribute “responsibility for multiple ledgers across a network, so that they are always sort of cross-checking each other and the actual truth or the absolute information resides across that network,” Hill says.

Hill, alongside Craig Fischer, a program manager for the Bureau of the Fiscal Service, is working to implement blockchain to manage physical assets such as government-issued laptops and phones, Federal News Radio reports.

“We take a lot of time and effort trying to make sure that the right equipment is in the right hands,” Fischer says. “We are trying to understand if blockchain technology can help improve efficiencies around that and streamline it a bit more because there is a lot of hype around this technology and I think we’re trying to understand where the applicability is and how it can actually make processes and inventory more efficient.”

Meanwhile, at the GSA, Jose Arrieta, director of contract operations for the agency’s Schedule 70 IT program, has been experimenting with blockchain to track contracts.

Arrieta and his team looked at the business process of Schedule 70 contracts and then used blockchain to enable industry vendors to only enter necessary information once instead of logging into multiple systems, according to Federal News Radio. GSA used microservices to automate the processes.

However, blockchain becomes less efficient when more information exists in the chain, Arrieta found. To combat this, GSA separated large files associated with the entries —photos and videos — and put them in a separate, immutable database. “But we only keep the information that’s on the chain itself that we need to automate so that the chain can operate flexibly and very lightly,” he says.

“From a cost perspective, we believe this will lower the direct costs of analyzing a proposal by close to 80 percent,” Arrieta says. “That’s not proven yet; we still have to build out the rest of the microservices so that much of the business process is automated, but our goal is actually to get the onboarding time from scheduled contractors from 110 days through our normal process and 40 days through our fast-lane process to less than 10 days.”

“There are all of these processes, regulations and rules that keep us from having speed of delivery and getting data in front of decision-makers faster and sooner without a collapse in quality,” Marcel Jemio, chief data architect and acting chief of OPM’s Data Management, Federal Data Solutions, said at a December industry event, according to GCN. “Personnel data is [personally identifiable information], but there may be a way that we can share this data more securely.”

Meanwhile, the Defense Department is being tasked with studying the cybersecurity applications of blockchain under a provision of the National Defense Authorization Act for Fiscal Year 2018, which was signed into law in mid-December. 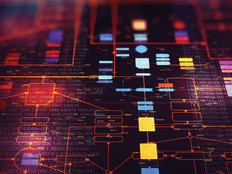