Four years ago, Dr. Robert Walker was facing a minor insurrection among the hospital staff at the Army’s Europe ­Regional Medical Command in Heidelberg, ­Germany, where he was then the chief medical informatics officer. The demands of transcribing medical records and reports were turning the Army’s highly trained physicians into data entry clerks. The problem was so bad, he says, that doctors were resigning over it.

“We almost had a rebellion,” says Walker, who is now director of health strategy and innovation for the Army Office of the Surgeon General. “Doctors had to stay extremely late to finish their notes and come in on weekends to update their patients’ electronic health records. It was so painful that they were leaving the military. We had invested an incredible amount of resources into training these physicians and really wanted to keep them.” 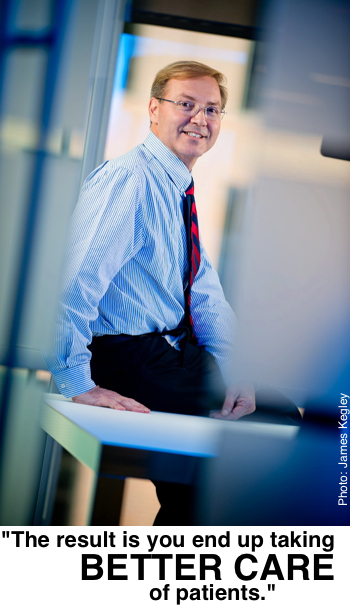 That’s when the military got serious about voice recognition software. It adopted Nuance Communication’s Dragon Naturally Speaking software (and later, Nuance’s health solution, Dragon Medical 360) and integrated it with the military’s informatics systems. And, slowly, things began to improve.

Doctors trained on Dragon began not only to file their reports in less time but also with greater detail, says Walker. Voice recognition worked so well that the ERMC canceled its transcription service, saving the Army $3 million in fees. Walker says using Dragon for his own patients improved his accuracy and increased his engagement with them, especially after he had a flat-screen display mounted to his office wall so patients could see what he was dictating.

“Before I started dictating in front of patients, I would have said I don’t make many mistakes,” he says. “But now once or twice a week they correct me — they say it was their left knee, not their right, or that the accident happened two weeks ago, not last week. In that way, the patient verifies what’s going into their medical record, and it gives them ownership of it.”

Still, using voice recognition software has its own complications. While the technology has made great strides over the years, speech recognition is still far from foolproof, notes Charles Palmer, executive director of the Center for Advanced Entertainment and Learning Technologies at Harrisburg University of Science and Technology.

“The system has to isolate each word, and that can be affected by things like background noise, the speaker’s accent, and the speed at which he speaks,” he says. While the software does well at recognizing complex terms, such as those used in medicine, it can stumble over simple words like “but” or “and” because there’s less data for the software to work with. Navigating using speech — like moving from field to field inside a form, or from page to page in a document — can also be challenging for users, he adds.

Lt. Col. Charles Tujo, a radiology consultant to the Air Force Surgeon General, says that voice recognition software makes life easier for medical professionals in some ways, but it can be time consuming in its own right.

of clinicians say voice recognition is faster and more accurate than typing.

“You cannot just dictate and forget about it,” he says. “You have to dictate, read what you just dictated, fix any problems with spelling or grammar and then verify it. If the system makes a mistake, you must correct it and train the voice software. If you just fix it, the software will continue to make the same mistakes.”

The key to avoiding frustration is to train users early and well, Walker says.

“If someone picks up Dragon and doesn’t have someone else there to help them, they tend to put the product down pretty quickly,” says Walker. “You’ve got to get them over the frustration phase. That’s shortened dramatically if you do your upfront training correctly.”

“It’s not how well you dictate into a mic that matters; it’s how well you take advantage of the macros,” he says. “Take me, for example. I do a fair number of joint injections. Say a patient comes in with impingement syndrome in his right shoulder. I say ‘right shoulder impingement syndrome injection’ and up comes the patient’s medical record on my screen with almost everything already filled in. All I need to do is say what dose of lydocaine and steroids I’m using, and I’m done.”

Using macros also helps to enforce best practices across different medical units, adds Marshall. “The macros remind you of things you may not otherwise remember,” he says. “The result is you end up taking better care of patients.”

Walker says he can’t imagine going back to the days of typing medical records, or dictating them onto tape and having to pore over the transcriptions weeks later.

“I get a rash now watching somebody sitting there pecking at a keyboard,” he says. “I look at voice recognition, and I think we’ll tell our grandkids that we used to sit in front of a keyboard and tap out each letter. They’ll think we lived in the age of the dinosaurs.”

To ease the adoption of voice recognition software, follow these tips.