MeriTalk’s Cloud Computing Exchange recently released the Cloud First Consumer Guide, the result of interviews with 15 federal IT leaders and several years of monitoring cloud-computing trends. The report, which can be downloaded here, offers exciting insight into the government’s cloud efforts, with hard numbers on savings and direct quotes from some of the most influential voices in the federal IT community. Here are some of the most interesting numbers from the report:

Perhaps more exciting than the numbers were the anecdotal success stories from agencies across the government. Because no two cloud migrations are identical, these stories can help other agencies identify their own paths to the cloud:

In ATF’s case, the cloud email and collaboration offering also came with much more robust capabilities than their existing on-premise service – capabilities that would have been difficult and costly to create in the existing environment.

… NASA opted for cloud-based disaster recovery to geographically expand its resilience without paying for independent infrastructure. The Department of Homeland Security (DHS) saw a benefit to the “pay-as-you-go” model; current-year payment rather than an investment-return scheme.

The Equal Employment Opportunity Commission (EEOC) moved multiple applications to the cloud – Web conferencing, IT management services, enterprise financial management, and analytics applications – and used a number of providers to get there. 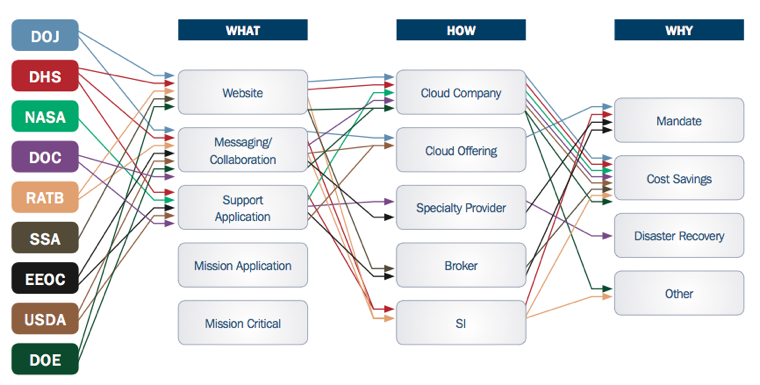