For years, when federal agencies wanted to upgrade their telecommunication network, each organization made its own decisions on what it needed, and its own plans on how to pay for the work. The process often led to delays and higher costs. Worse, the experience sometimes left scar tissue among feds who helped move in newer infrastructure.

But as part of a new contract vehicle from the General Services Administration, agencies are preparing for a more seamless update to next-generation network technology, one that includes software-defined networking and 5G wireless networks.

If all goes according to plan, the new $50 billion, 15-year Enterprise Infrastructure Solutions contract will build a modernized communications network across government that could last for a generation and improve services for citizens.

GSA plans to issue the program’s first awards in the next few months, but agencies have been preparing to move away from the current contract offerings, known as Networx, for nearly two years.

Getting a Jump-Start on Modernization

Agency officials say they are attracted to EIS’s potential for improving their organization’s networks and have started mapping out their transition.

“We wanted to get into the mix early and use our expertise in the discussions of how to implement this governmentwide,” says Timothy Quinn, chief of the Office of Enterprise Information at the U.S. Geological Survey. “We want to get the best value from the contract for the Department of Interior.” 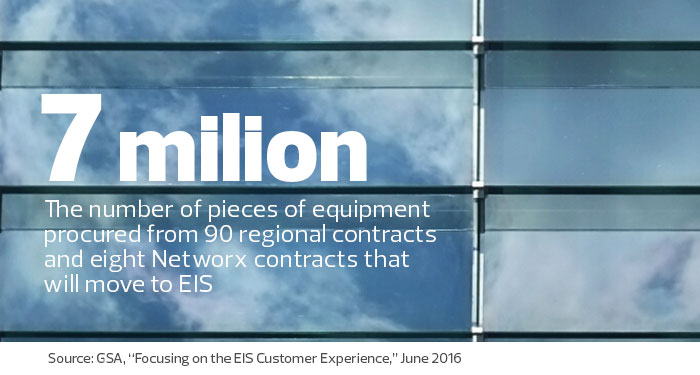 In previous transitions, the asset inventory process, which establishes a marker for each agency’s hardware and software holdings, often proved troublesome. But with support from GSA officials, Quinn believes DOI will avoid similar missteps. At the same time, because the EIS and Networx contracts will overlap through 2020, DOI has a jump-start on modernization.

“EIS gives us access to an array of technologies and services we didn’t have before,” Quinn says. “We’re already migrating and transforming our network to where we want it to be post-EIS. We can’t afford to keep up with the demand for digital services from citizens with the old technology. There are tremendous cost savings by moving to carrier Ethernet, broadband and cloud services: more data for less money. And when we make it better, people use it more.”

Learning Lessons from the Networx Transition

Federal officials remember the rocky transition to the Networx contract a decade ago. Agencies unexpectedly made a dramatic jump in technology, often from traditional telephone wires to digital services, and some were not prepared for such a leap. The full switch took nearly six years and, as a result, never saved as much money as expected.

Today, those memories remain and are a key reason so many feds are putting an emphasis on a smooth transition to EIS, says Katell Thielemann, a research director at Gartner. GSA has learned from the Networx switch, and has invested time and money into a more deliberate process for the move to EIS. This includes funding for training, consultations with federal agencies and templates that organizations need to complete before the move.

“The devil will be in the details of execution — how well the templates are filled out,” she says. “These agencies are enormous.”

Sometimes agencies can struggle with simpler tasks, such as counting the number of data centers they operate. Now, they’re being asked to complete a much more complex task: inventory all of their computer services.

Federal officials give GSA high marks for their support during the EIS transition.

“The preparatory work has taken more than three years and GSA has been involved every step of the way, with help and additional support if we requested it,” says John Donovan, director of enterprise network services at the Agriculture Department.

Preparing for a Network Upgrade

With the move to EIS on the horizon, USDA plans to build a small number of centrally managed, enterprise-level networks. Such a move would be a technological leap from the 17 networks the agency runs today, says Jonathan Alboum, the department’s CIO. EIS will offer a vehicle to acquire much of that enterprise-level technology and infrastructure, as well as more cloud access and expanded security offerings.

“This kind of change takes a lot of preparation — not just our discussions with the GSA but with all our agents,” Alboum says. “One of our primary jobs now is education, how we share information about the changing infrastructure. We think about how we should evolve to take advantage of EIS. How do we leverage skills at both the agency and department levels?”

By moving to fewer enterprise-level networks and operating them as a managed service, USDA expects to reduce costs, eliminate redundancies and use EIS to buy the technologies necessary for improvements, says Douglas Nash, deputy CIO for operations and infrastructure. 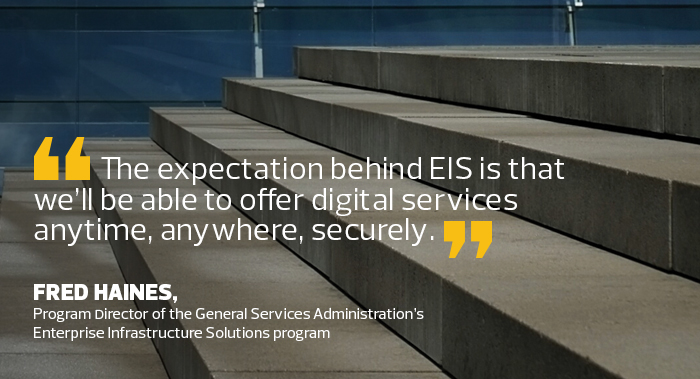 “With the new contract, we’ll be able to explore a broader range of technology options at lower cost,” Nash says. “USDA is often one of the first federal agencies to bring in new technology, and EIS will support that.”

At the same time, Alboum says, the goal of network transformation is to provide improved services to citizens.

“A farmer who comes to a field office to sign up for a farm program or submit an acreage report wants to get back to his fields,” he says. “The better our computer networks are, the better his experience is going to be, especially at busy times when reporting deadlines are approaching and all that data is going through one pipe.”

Serving as a Model for Future Technology Acquisitions

GSA wants a seamless transition to EIS because the contract represents “a model acquisitions process” that will be used in the future, Gavino says. Specifically, officials believe the contract vehicle allows agencies to modernize now and still keep up with technology in the years ahead. At the same time, EIS wants a mechanism to meet the bandwidth needs citizens require of government, Haines says.

But Gartner’s Thielemann cautions that while EIS is a useful tool, it will not solve all of federal IT’s telecommunications problems.

“A contract with a $50 billion ceiling for the telecom infrastructure of a vast organization like the federal government is a big deal, but it’s not a magic wand,” she says. “It opens the aperture for agencies to take advantage of new services at a time when the need for bandwidth is exploding.”