When U.S. soldiers in Afghanistan and Iraq need to decide who's an insurgent and who's an ordinary citizen, mistakes can mean the difference between life and death.

When U.S. soldiers in Afghanistan and Iraq need to decide who's an insurgent and who's an ordinary citizen, mistakes can mean the difference between life and death.

To sway the odds in their favor, Army personnel pull out high-tech cameras that focus on a particular part of the human face: the eyes. More specifically, this cutting-edge technology captures images of irises, the colored circles around pupils.

Like fingerprints, no two irises are alike. When soldiers compare images with archival records, they can quickly determine if a suspect is on a watch list — and they can be confident about the results. The Defense Department estimates that an iris match is wrong only one in a million times; the odds improve even more when an individual's two irises are scanned.

"For me, the real proof is we don't see reports from folks 'in theater' complaining about false matches or missing matches," says Jon Lazar, deputy director for Defense biometrics.

The U.S. military may soon have company. The National Institute of Standards and Technology is working on technical specifications for embedding iris records into Personal Identity Verification smart cards used to verify government workers and contractors. Final approval is expected sometime this year, says Patrick Grother, a computer scientist at NIST.

Accuracy is only one way iris scanning complements more traditional biometric identity markers such as fingerprints and facial photos. The cameras are highly portable and capture iris images a foot or two away from subjects using near-infrared light — a special wavelength that's invisible to subjects and causes no discomfort.

Fingerprint sensors require people to place a finger directly on a scanner.

"The promise of iris technology is that it it has the potential for people to be verified quickly in a biometrically controlled area," Grother says.

Once an iris is scanned, software runs image-processing algorithms that isolate the physical differences that separate one person from another and then converts the image into a mathematical representation that's sent to a database (or soon, a smart card). The main database that DOD uses in Iraq and Afghanistan holds about 4.5 million entries, most with iris data. It takes only a few seconds to compare images, and the processing load is light enough that standard desktop and notebook systems can handle the job.

One of the biggest drawbacks may appear to be how to populate the archival database. After all, where do you get the iris scans of insurgents and terrorists in the first place? Lazar says that's not as difficult as it sounds.

TAMPER-RESISTANT: The texture of the iris is stable and distinctive, even in identical twins, and is extremely difficult to surgically spoof.

Biometric data — irises, fingerprints and facial photos — are now routinely captured in Afghanistan and Iraq whenever people apply for military base access, join the police or a government post or if they're arrested. The database also holds forensic evidence collected elsewhere, such as a latent fingerprint from an unexploded improvised explosive device.

This creates multiple layers for snaring insurgents. For example, a soldier who sends an iris scan taken outside a village in Afghanistan may match iris data of a convicted thief whose fingerprint was lifted from a roadside bomb.

Although accuracy is high, care must be taken to capture a high-quality image, and distance is a factor. Many current devices require subjects to be within a foot or so of the camera, but next-generation devices can capture iris characteristics from more than 6 feet away, Grother says.

As scanning distances grow, so does the potential for new applications, such as security scans at airports and Customs and Border Patrol checkpoints. The technology could soon determine if someone is on a watch list or free to pass as he or she is walking to the security counter.

But getting a scan while people are on the move may take ingenuity because a subject still must look directly at the camera, Lazar says. One answer is to install a camera adjacent to a sign saying something like, "Look here for expedited processing." For that particular picture, smiling would be optional. 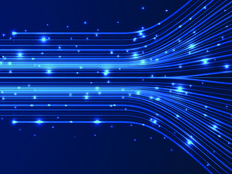