Email wasn’t exactly invented. It evolved from a simple protocol for sending very small files into the core of professional and personal communication. Along the way, a few key individuals set the stage for the modern Internet. The government has a rich history of innovation in the technology space, and email is an important part of that timeline. Here are a few key moments in the government’s history of email.

Working for MIT, Tomlinson is credited with sending the first exchange of text between two computers. No one truly understood the importance of what Tomlinson had done. “A colleague suggested that I not tell my boss what I had done because email wasn't in our statement of work,” he said in an interview posted on BBN Technologies.

Well, that was fast. ARPANET was the first network to adopt TCP/IP protocol and is considered the main predecessor to the commercial Internet we know today. ARPANET research was funded by the Defense Advanced Research Projects Agency (DARPA), a branch of the Defense Department.

The post office recognized early on that electronic communication was a threat to traditional mail. The agency began a program to compete with email as early as 1978. Known as E-COM, the program allowed users to send electronic mail to a post office branch. From there, it was printed and hand-delivered. In 1982, the Government Accountability Office predicted the incredible impact of email very accurately (PDF download):

As electronic communication become more popular and the Internet grew, it became evident that more top-level domains were needed:

While the initial domain name "ARPA" arises from the history of the development of this system and environment, in the future most of the top-level names will be very general categories like "government", "education", or "commercial". The motivation is to provide an organization name that is free of undesirable semantics.

In the early years, DARPA was the administrator of all top-level domains, but responsibility was spread out over time.

Over the next 20 years, Microsoft Windows and Outlook (Microsoft Mail’s successor) was on nearly every government computer. 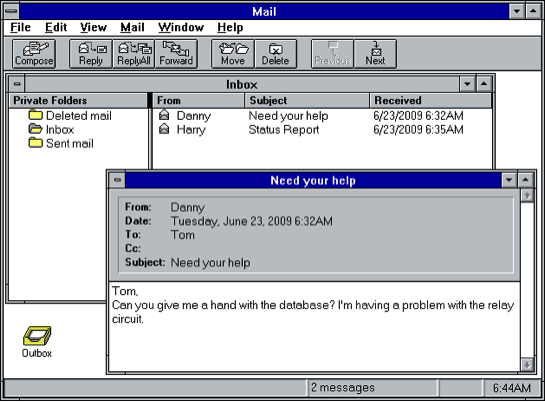 A Macintosh Portable was used to send the first email from space. Astronauts Shannon Lucid and James Adamson, aboard the Space Shuttle Atlantis, sent this message back to earth:

Now, astronauts are moving beyond email. Chris Hadfield, for example, created a music video for YouTube while on the International Space Station.

2009: Barack Obama is the first President to use a BlackBerry.

Leading up to his inauguration, President Obama had to fight for his right to continue using his BlackBerry. His wish was granted, but his device was replaced with a more secure model, according to the New York Times:

“The president has a BlackBerry through a compromise that allows him to stay in touch with senior staff and a small group of personal friends,” said Robert Gibbs, his spokesman, “in a way that use will be limited and that the security is enhanced to ensure his ability to communicate.”

First, only a select circle of people will have his address, creating a true hierarchy for who makes the cut and who does not.

Second, anyone placed on the A-list to receive his e-mail address must first receive a briefing from the White House counsel’s office.

Third, messages from the president will be designed so they cannot be forwarded.

2010: The GSA is the first agency to move email to the cloud.

The General Services Administration led the way to the cloud by beginning a migration of 17,000 users. They chose Google Apps for Government, which costs about $5 per employee per month, resulting in a reduction of email operating costs by 50 percent and a projected savings of $15 million over five years.

Are there any important developments in the history of email that we missed? Let us know in the Comments section or on Twitter.