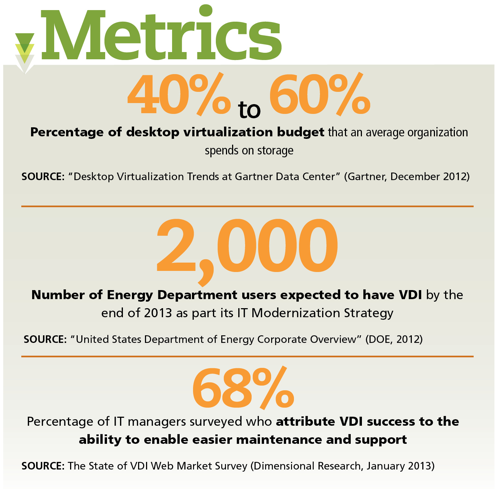 Individual computing devices don’t “matter that much anymore” when an agency uses virtual desktop infrastructure, says Tommy Hwang, CIO of the Merit Systems Protection Board. VDI moves data and processing off of machines and onto a central server.

“You don’t have to get the most powerful laptop or desktop to do all that processing, because the server is doing that processing,” Hwang says. “You can potentially go to a tablet or any other device, and you can use the VDI.”

That flexibility can facilitate bring-your-own-device programs and can save agencies money by allowing them to purchase less-powerful machines, Hwang says. Virtual desktops also improve security for employees who work remotely, he adds, because data never leaves the agency’s server.

“The security benefits become a big driver,” says Neil MacDonald, a vice president and fellow with Gartner. “It’s easier to protect one server than it is 100 distributed machines.”

Hwang says that, in addition to the security and flexibility benefits, virtual desktops can provide a measure of stand-ardization that makes troubleshooting and updating software easier. Instead of manually installing new software on many machines, he says, technology managers can simply update the virtual desktop, and employees see the update the next time they log in.

Virtual desktops can also help an or-ganization recover from natural disasters. “Your workforce can get back to work at another location and never skip a beat,” MacDonald says. “They will have exactly the same desktop that they would at their old office.”

One drawback to virtual desktop infrastructure has been the cost of initial investment in storage space. But in August, VMware announced its Virtual SAN — a virtual storage area network solution that allows organizations to pool inexpensive storage resources.

That announcement is an economic game changer, MacDonald says. “Now we have a radical new approach to lower the cost of storage without compromising availability or performance,” he says. “It will change the economics of virtual desktops.”

Fermi National Accelerator Laboratory — A pilot project provides virtual desktops for a bring-your-own-device arrangement to students participating in summer programs at the lab.

Nevada National Security Site — Approximately 1,200 virtual desktops are in use at the site today, saving around $800,000 annually and enabling users’ desktops and tools to be available from any work location.

FedTech visited DLIFLC’s campus in Monterey, Calif., to see how these devices were improving education. The iPads allow students to keep in touch with their instructors and view resources such as training videos and foreign language news websites from anywhere. The training improvements the devices offer help students gain greater mastery of the languages they study.

Learn more about how DLIFLC is using mobile technology here.