The Internet of Things holds a world of possibility for federal agencies, but in order to leverage that potential, they’ll need a more agile computing platform.

Differences Between Fog and Cloud

While cloud computing carries data back to a central server for storage and analysis, fog computing enables analytics and other functions to be performed at a network’s edge, right at the data source. Fog systems provide faster functionality for users, but also come with enhanced security risks that IT managers must weigh before implementing.

Forrester Analyst Andre Kindness says the rise of fog computing may be a response to otherwise insufficient data transfer capacity.

“There’s not enough bandwidth worldwide to move data like we want,” Kindness says. “The reality is the network cannot keep up.”

Unlike cloud computing, fog computing allows smart devices to send, receive and store information within a closer geographic area, making it a natural partner to the IoT.

"There’s pressure to push computing power to the edge, to deliver the most capable analytic power at the most appropriate point,” says Rick Holgate, a research director with Gartner. “Fog computing can deliver better insights closer to where the data gets collected.”

“If we install a fog system and LED lighting, we can automatically dim the lights when no one is in a room,” Hall says. “A system like this quickly pays for itself.”

“They’re able to batch-scan the passenger queue as it’s in motion, looking for anomalies, chemicals and facial recognition of known terrorists,” Hall says. “It’s a great application of fog computing because it increases protection.”

Hall offers the example of a hacker accessing a car’s network. A perpetrator could hack into a connected car and deploy the airbags, causing an accident at highway speeds.

“The ability to unlock fog’s potential value depends on our ability to secure it,” Hall says.

Despite those concerns, Hall predicts significant strides in agencies’ use of fog computing in the coming year.

“Initiatives are maturing and will start to show real results,” he says. “We won’t see an instant transformation, but I believe we’ll see more in 2016.” 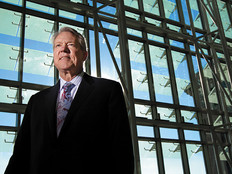