For federal government workers who use Google Apps for Government — Gmail, Google Calendar, Google Docs, and more — those apps may soon get a lot smarter, thanks to machine learning.

David Mihalchik, head of U.S. Government and Healthcare at Google for Work, says that machine learning is one of the key areas of focus as Google looks to enhance its cloud-based applications and services for government workers.

Machine learning is an artificial intelligence that can learn from and make predictions based on data it accesses. Google announced in March that it would build the technology into its cloud products in hopes of winning enterprise business.

In an interview with FedTech, Mihalchik says that federal government users face many challenges and are often under-resourced. “They often have a time crunch. They’re constantly dealing with trying to do more with less,” he says. “Machine learning is about this concept of assist: How can computers help you to offload some of the basic tasks so that you have more time available for analysis, for the things that computers can’t do?”

One recent example of Google infusing machine learning into its products is the “find a time” feature for Google Calendar, which accesses the calendars of participants in a meeting and then suggests times that would work based on everyone’s commitments.

Making the Switch to Cloud-Based Apps

Mihalchik says that five or six years ago, “it was unimaginable that a government agency would be using Gmail to run its entire business every day, and that every employee would have access to the same type of cloud computing tools that were then thought of as consumer tools. Today, this is widely adopted in the government and growing rapidly.”

What happened to change that? The federal government has taken a cloud-first approach, and while many agency-specific apps are not yet in the cloud or virtualized, many basic office functions are.

“We have gone from no one using any Google products, or really using any cloud computing capabilities in government, to now hundreds of thousands of government employees using the platform across the agency every day, to work smarter and get work done in ways that only the cloud can enable.”

Why have government agencies embraced Google Apps when they have eschewed other, more modern technologies? Mihalchik say that a big driver is the desire for “more powerful technology at a lower cost.”

Government agencies want their employees to be able to work smarter and more closely with their peers. Mihalchik notes that in the past, if an agency secretary needed to prepare an emergency memo for the president in half an hour, it would be very difficult to get input from multiple people in the secretary’s office. Now, with Google Docs, multiple users can edit the same document in real time.

Before, he notes, if government workers were adding information to a spreadsheet, they might have to email the spreadsheet around so that everyone could add their figures and pass it on to the next person. Now, thanks to Google Sheets, that spreadsheet can be edited collaboratively.

Another major driver is unlimited storage via Google Drive, Mihalchik says, which users can access from anywhere and use to store any file type. Older storage systems had limited storage and could only be accessed in the office for certain kinds of files, he says. “It’s a very stark contrast between agencies that have adopted this digital cloud model and agencies that haven’t,” he says.

In many cases, once agencies have chosen to go with Google Apps for Work, they can make the transition in 90 days or less, according to Mihalchik. “The transition process is something we and our partners have down to a science,” he says. “It can happen very quickly.”

Each agency differs on how they roll out the technology and handle management and training, but there is a common theme that has emerged among them, Mihalchik says. “They have gone from an old legacy system that was costing them a lot of money and making it hard for their employees to do their jobs,” he says. Now, in a short period of time, “they completely transform their environment” and bring “new tools to their employees.”

The Google Apps for Work suite has been certified under the GSA’s Federal Risk and Authorization Management Program, or FedRAMP, and Mihalchik says that Google is currently evaluating the new FedRAMP High Baseline Requirements.

Google Apps enable employees to turn their ideas into reality, Mihalchik says. “They don’t need to be an expert in coding,” he says. “They are able to just use these tools to get something done that they couldn’t get done before.”

Mihalchik thinks the influx of younger workers — millennials in particular — into the federal workforce will lead to increased adoption of Google Apps among federal agencies.

“Those millennials are expecting a certain type of technology in the workplace that was available to them in school,” he says. “They come to the workplace, and they want to see those types of tools.” 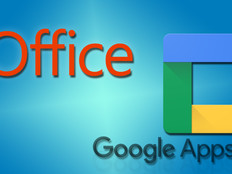