The Air Force is moving to Windows 10. Last month the service branch issued a statement saying that it expects to complete its migration to Microsoft’s latest operating systems by Jan. 31, 2018.

In the statement, the Air Force said it is moving to Windows 10 to improve its cybersecurity posture, lower the cost of IT and streamline its IT operating environment. The statement notes that “Windows 10 provides improved security features to mitigate cyber threats and a common baseline for Air Force cyber operators to manage, thereby reducing costs.”

Windows 10 will become the standard operating system for Microsoft Windows clients across the Air Force Network, and as a result “a significant portion” of the Air Force’s PC device inventory will need to be replaced, the Air Force said.

The migration efforts will kick off later this year as part of each Air Force base’s computer technology refresh efforts, according to the statement, and units are authorized to upgrade existing devices or purchase new tablets and laptops through AFWay, the branch’s web-based system for purchasing IT. The Air Force is advising its units that they should refrain from purchasing desktop PCs unless their mission dictates otherwise.

“In many cases, users will receive replacement mobile computers with Windows 10 preloaded, while remaining users will have their existing computers upgraded to the new operating system,” the statement notes, adding that affected users will be informed on how to back up and restore their data. The shift will likely lead to wider use of smartphones, tablets and 2-in-1 device that run Windows 10.

A Cybersecurity Boost via the Update

Defense Department CIO Terry Halvorsen has ordered all DOD components to migrate to the Windows 10 “Secure Host Baseline,” which includes not only the Windows 10 operating system but also additional secure applications that have been preconfigured.

Systems that currently run Windows 10 will still need to be upgraded to the standard desktop configuration to take advantage of cybersecurity improvements, according to the Air Force.

“The standard desktop configuration provides a single standard, enterprise-wide managed environment across the Air Force Network,” the statement notes. “New security features in Windows 10 will allow the Air Force and DOD to install software patches faster and counter a major cyber-intrusion technique called ‘pass the hash.’ Using this technique, attackers may access remote servers by using a stored hash, or a one-way transformation, of a user’s password rather than the standard plain text password. The new operating system also will increase accountability and transparency across DOD networks, allowing cyber defenders to better detect malicious activity.”

The Air Force deadline is a year behind the DOD’s overall deadline for migrating to Windows 10. Combatant commanders within the DOD have limited waiver authority over their respective upgrade plans to get extensions for up to 12 months on a case-by-case basis, but any waivers for more than 12 months need to be approved by the DOD CIO.

According to FedScoop, Halvorsen said in July that the DOD is meeting its overall goals, but that 100 percent of the DOD will not meet the upgrade deadline of Jan. 31, 2017. “What I’m trying to figure out right now is just what percentage of the stuff might not, might take another year to 15 months to get done,” Halvorsen said. He added that tactical and embedded systems will be the most complicated to move to Windows 10, according to FedScoop. 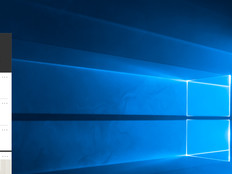