The Grace Hopper Celebration (GHC) of Women in Computing, an annual conference designed to honor, celebrate and convene women in the field of computing, kicked off today in Houston.

The conference, which started in 1994, brings together women technologists and top computing minds to highlight the contributions of women to computing. Additionally, the conference leads to collaborative proposals and serves as a networking and mentoring opportunity for attendees.

“Conference presenters are leaders in their respective fields, representing industry, academia and government,” according to the organizers, the Anita Borg Institute and the Association of Computing Machinery. “The conference also offers professional development through a variety of activities.”

The conference was inspired by Navy Rear Admiral Grace Hopper, who helped invent some of the early English-language programming languages. Hopper is most often associated with the development of the Common Business-Oriented Language (COBOL), which was based on the FLOW-MATIC language that she designed back in 1958.

Prior to the introduction of such programming languages, computers spoke only in binary code, which was impossible for humans to understand. By creating new kinds of readable programming languages, Hopper thought that programming would become more accessible and lead to more people being interested in the field. The decades since have proven she was right. Hopper died in 1992 at the age  of 85.

Grace Hopper explains the concept of nanoseconds in this undated video.

The programming languages that Hopper helped create are still used by government agencies today — to the chagrin of IT leaders looking to modernize their IT systems. It’s undeniable that Hopper had an incalculable impact on computer programming.

IBM CEO Ginni Rometty spoke during an opening keynote session, and advised women in technology to take risks and not allow others to limit their potential. She spoke in starkly personal terms about her upbringing and the resilience she learned from her mother. 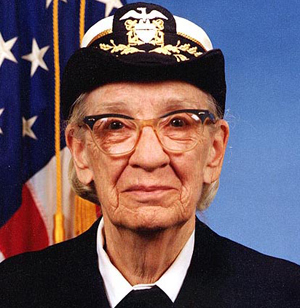 “When my father left us, my mother went back to school immediately,” Rometty said, according to Forbes. “She went to school in the day while we were at school and she worked at night. She worked very hard to never let someone define her as a victim or a failure.”

Rometty, who started working at IBM in 1981 as a systems engineer in Detroit, rose steadily through the leadership ranks to become CEO in 2012. She told the GHC attendees to never let others hold them back. “You never let someone define who you are,” she said. “Only you define who you are.”

“At Grace Hopper, we’ve got 15,000 people there, mostly women, who are super excited about technology,” she told the Chicago Business Journal. “So they will be able to see the companies that are participating in Top Companies, which should be a factor in their decision about where to go. Do companies care about this? Are they making an investment in this? So that’s one of the things we’re very excited about.”

For more on Grace Hopper and other female pioneers in technology, check out “Mothers of Technology: 10 Women Who Invented and Innovated in Tech.”