The Defense Department, with a staggering 4 million devices to upgrade to Windows 10, is moving to the new platform along with many other agencies.

Installing the Windows 10 operating system across the Pentagon nearly requires a small army. Not only is the number of devices astonishing, but to complicate matters, not all those devices use the same version of the software.

While the lack of a standardized OS can create confusion in a sprawling environment, upgrading so many computers at once can be time consuming and difficult.

That’s why, in November 2015, the Pentagon set a January 2017 deadline for its agencies to migrate to Windows 10. The entire organization didn’t reach that goal, but the ambitious approach helped kick-start the transition as DOD and other federal organizations move to a new system.

“Our stance was aggressive. That usually gets people’s attention,” says Randall Conway, DOD deputy CIO for information enterprise. “We’ve got everybody on board. Everybody understands the need, and they’re off and running.”

Pentagon IT leaders, who always keep one eye on security, wanted to make the switch quickly.

“We saw that there was some significant value for the department to move forward as soon as possible,” Conway says. “The security features were one of the primary reasons. It was important to us to be as protective as possible with our end-user systems. It also provided us a move toward a standard operating system.

“At some point you have to ask, how many versions of a Microsoft operating system do we want in the department? We thought, now is the time. Why wait? Let’s get started.” 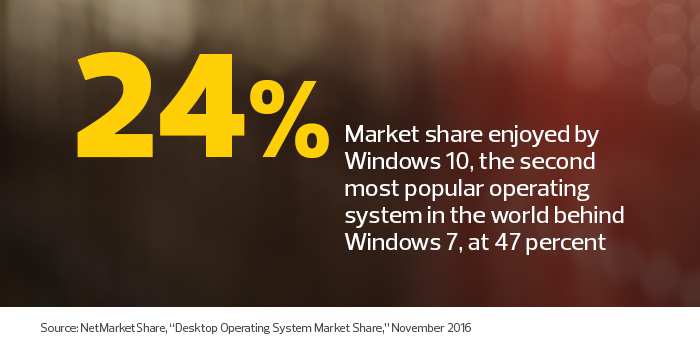 Al Gillen, vice president for software development and open source at IDC, says Windows 10 deployment is entering into the mainstream — meaning that early adopters have already made the switch, and the bulk of organizations are now poised to follow suit. In particular, Gillen says, Microsoft’s announcement that it will end support for Windows 7 in January 2020 has motivated many organizations to upgrade sooner rather than later.

“If you’re going to be rolling out new PCs, and you have a three-year lifecycle or longer, you’re going to have PCs that are beyond the extended-support deadline for Windows 7,” Gillen says. “For federal agencies especially, that would be a significant concern.”

The Windows 7 deadline is a compelling reason to speed toward Windows 10, but it’s not the only factor.

The desire to have the latest and greatest technology — along with the security and performance improvements that come with it — is also motivating a number of agencies to make the switch.

“Microsoft’s end of mainstream support for the Windows 7 operating system is the most significant factor driving the move to Windows 10,” says Beth Anne Killoran, CIO at the Health and Human Services Department. That agency plans to complete its transition to Windows 10 in fall 2017. “Additionally, enhancements in security and management tools are factors.”

More simply, “I firmly believe you shouldn’t have older technology in your office than you have at your house,” says Guy Cavallo, the former executive director of IT operations for the Transportation Security Administration.

TSA’s Washington headquarters overlooks a large technology box store, and Cavallo says that if the agency didn’t upgrade, those customers could leave with more advanced technology than TSA operates.

“That’s not a great way to attract millennials,” he says.

TSA’s migration was more than 20 percent complete by fall 2016, and the agency expects to finish the job in April.

As with DOD, security played a large role in expediting TSA’s move. In particular, Cavallo was intrigued by new built-in tools that can prevent phishing exploits and reduce the organization’s reliance on third-party security tools.

“Having security built into the operating system,” Cavallo says, “we knew Microsoft would keep it up to date.”

The Office of Personnel Management launched its Windows 10 pilot in early 2016 and plans to finish its transition by spring 2017. In addition to security upgrades, feds are excited about the move for an improved user experience (Windows 10 boots 30 percent faster) and application performance.

Rather than planning an in-place upgrade, the TSA accelerated a refresh of all existing hardware, much of which is between 3 and 6 years old. Upgrading existing devices would have been more expensive than replacing them, Cavallo says, because that would have required the agency to deploy IT personnel to install additional memory on machines at airports nationwide. Instead, the refresh gives TSA the opportunity to increase the use of mobile devices within the agency.

“It introduced the use of tablets, which we had not supported,” he says. 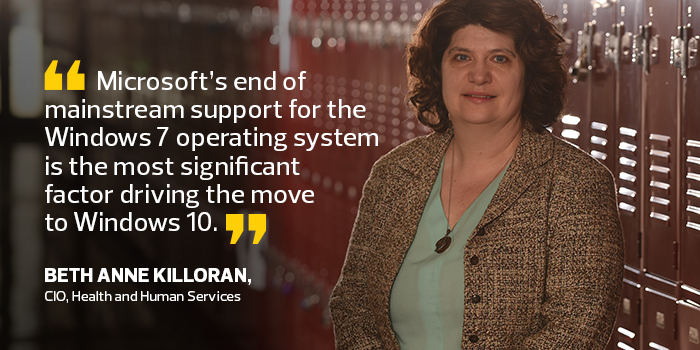 One of the obstacles, however, was application compatibility, a frequent problem in OS upgrades. TSA hasn’t experienced glitches with software from major vendors but has seen hiccups with smaller companies.

To help prevent slowdowns, the agency ran four beta tests to check for compatibility issues. Still, problems slipped through. “We are finding that, for some vendors, the Windows 10 security settings are causing them not to work,” Cavallo says. “One application was built for Windows XP and was never upgraded, and we found that it tends to freeze. We’re helping the vendor figure out how to rewrite their code to make it compatible with Windows 10.”

Surveying the inventory of agencies within DOD is another hurdle, Conway says, as IT administrators must determine which endpoints are capable of supporting Windows 10.

“You have to give people a chance to go do their surveys and learn what they have,” he says. “It can be a time- consuming process.”

The Pentagon expects that developers will create new applications with the Windows 10 operating system in mind. But the department is being deliberate in its handling of legacy applications, Conway says, ensuring compatibility before switching out or upgrading associated hardware. That’s particularly true of combat-centric applications found in equipment such as tanks and aircraft.

“They’re on a more lengthy timeline,” he says. “We’re managing that differently.”

Although work remains, Conway feels good about DOD’s pace for the migration.

“It’s a really good story about how such a massive organization can pivot in a short period of time,” he says. “If the Defense Department can do it, there aren’t too many excuses why somebody else can’t.”

Microsoft developed Windows 10 with the latest cyberthreats in mind, making it more naturally hardened against those types of attacks. But the operating system also includes several specific security features that were not part of previous versions:

1. Secure Boot: This feature loads only boot files signed by a trusted source.

2. Device Guard: This prevents code from executing unless it is known to be trusted — a reversal of the traditional approach in which code is trusted unless it’s known to be malicious.

4. Recovery and Reset: Advanced users can easily reset a PC by reinstalling the operating system while keeping their files in place. Users can also revert to an earlier build of the system if problems persist.

5. Windows Defender: The anti-virus program automatically activates if another level of protection is not already in place. 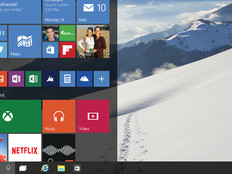