The Modernizing Government Technology (MGT) Act is getting more than a second lease on life; its chances of becoming law now look brighter than ever, according to lawmakers closely involved in the effort to modernize federal IT.

Rep. Will Hurd (R-Texas), one of the original bill’s lead sponsors and the chairman of the House Committee on Oversight and Government Reform’s IT subcommittee, says a modified version of the MGT Act won’t be introduced this week but is coming “very soon.”

Hurd also says that he expects President Donald Trump’s formal budget to include a proposal for a centralized IT modernization fund that would be housed in the Office of Management and Budget.

Making the Case for IT Modernization

As part of its broader cybersecurity proposal, the Obama administration last year proposed a $3.1 billion IT Modernization Fund (ITMF). The fund was designed to “address an estimated $12 billion worth of modernization projects over 10 years.” Congress took up the issue, only to see momentum stall at the end of 2016. In September, the House of Representatives passed the MGT Act, which didn’t appropriate any new money, but would have authorized working capital funds at the 24 agencies governed by the Chief Financial Officers Act of 1990.

The funds would allow agencies to reprogram funding (with the approval of appropriators) to improve, retire or replace existing IT systems. This would help boost efficiency and effectiveness, transition to the cloud and support IT capabilities that deal with evolving security threats. The bill also authorized a governmentwide revolving fund that the General Services Administration would manage, akin to the ITMF.

Hurd, speaking Tuesday at FedScoop’s IT Modernization Summit in Washington, D.C., said that the goal of the MGT Act is simple: If an agency is able to save money by modernizing its IT infrastructure, the money they save would go into a working capital fund, which could be used for up to three years.

The idea is to help agencies shed the “use it or lose it” mentality associated with budgeting. Under that approach, agency leaders often rush to spend appropriations before the end of the fiscal year because they fear Congress will not fund their programs to the same level during the next budget cycle.

Hurd noted that agencies’ networks and IT systems are so large that it’s “really hard” to both save money on a program and then use those savings in the same fiscal year. “That’s why you need the flexibility of these working capital funds,” he said. If the agency does not use the funds after three years, the money goes back to a central fund overseen by the Government Accountability Office that can be used across the government.

Getting the IT Modernization Band Back Together

As FCW noted, the MGT Act “stalled in the Senate after the Congressional Budget Office said it would cost $9 billion to implement.” Hurd said that score was based on an inaccurate reading of the original bill because CBO was “almost double-counting money that was being reprogrammed. So, if you reprogram money, it almost looks like it’s an additional appropriation. That’s why we had such a high price tag.”

Hurd says that lawmakers have tweaked language in the bill to prevent those problems with the CBO score from popping up again. “I think we’re getting close to that,” Hurd said. Appropriators in the House and Senate are on board with the new bill, Hurd said, and lawmakers are getting more comfortable with the changes.

Rep. Steny Hoyer (D-Md.), a co-sponsor of the bill, is optimistic about the new legislation’s chances. “I believe we can work with the Senate to move it onto the president’s desk," Hoyer said at the FedScoop event, according to FCW. “And I believe this is one of those areas where the president and both parties in Congress can come together and get something done.” He also expects a more favorable CBO score.

Hurd said the White House is excited about this initiative “because they want to see how you can you modernize wholesale across the government.” More needs to be done, Hurd added, to give agency CIOs full authority over the IT budget of their agencies.

Meanwhile, Hurd told FedScoop after the event that he expects Trump’s budget, which is expected to come later this spring, to include an IT modernization fund.

“This concept of a centralized fund at OMB is definitely going to be in the president’s budget,” he said. “And the question is — how much they’re going to be asking. We don’t know that answer yet.”

Hurd continued, according to FedScoop: “However much they ask is ultimately going to have an impact on our CBO score, even though, I don’t know how much appetite there is … for Congress to ultimately fund the [modernization fund]. And so that’s one of the frustrating things for me, is when CBO is scoring things they’re making it based on statements by the White House, versus what is likely to happen.” 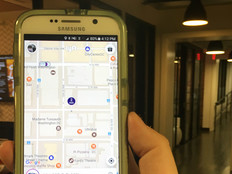