Editor’s note: This is the first article in an ongoing series examining how the federal IT landscape will evolve during the Trump administration.

Federal IT leaders face an uncertain mandate under President Donald Trump: They know the administration’s modernization priorities, but not how much money they’ll get from Congress or if legislators will ease their workload.

Only the underlying problem is obvious.

John Lee, director of marketing and communications for the professional group ACT-IAC, describes it this way: “unsecured, obsolete, legacy systems that consume too much federal IT funding,” he says.

Cloud and Commercial IT Solutions Get Prominence

The White House offered the clearest vision yet for its IT ambitions in a pair of executive orders signed this spring. The first, signed April 28, launches the American Technology Council. The second, signed May 11, outlines a path forward on cybersecurity.

The former requires the council to report on “the secure, efficient, and economical use of information technology” within 90 days. The latter directs agencies to procure shared IT services and follow the National Institute of Standards and Technology’s Cybersecurity Framework.

“There’s a huge shift in the way we’re investing in our IT commodities,” says Rob Adams, principal deputy CIO at the State Department. “We’re moving away from in-house development to the Cloud First posture.”

Commercial off-the-shelf software figures heavily in the agency’s IT plans, he says, with exceptions for the specialized, security-intensive tasks of visa processing and consular affairs.

In late 2016, the State Department issued a 100-day IT-modernization plan with 37 strategic initiatives; Adams says the department has completed 18 within that deadline. For example, State now has a Cybersecurity Integrity Center to coordinate responses to threats, a necessary development as Adams describes the agency’s networks as “a primary cybertarget.” The plan is not expected to change dramatically in the near term under the Trump administration.

The Federal Communications Commission’s budget proposal for fiscal year 2018 details similar ambitions. For example, the FCC scrapped a $3.2 million plan for an in-house help desk system and instead deployed a cloud-based solution for $450,000 that will cost a sixth as much to operate.

Hangups to IT Modernization: Money and People

The money available to pursue the Trump administration’s IT goals remains uncertain. The president’s budget request recommends edging federal IT spending up by 1.7 percent in fiscal year 2018, for a total $95.6 billion, but Congress will judge that figure.

“We have over 100 modernization activities in our IT infrastructure portfolio that we can’t work on due to existing funding constraints,” Adams says.

There’s also a lack of warm bodies to direct these initiatives.

“We still have a lot of senior political leaders who need to be placed in their jobs,” says Dave Wennergren, executive vice president and chief operating officer at the Professional Services Council.

And federal IT managers could use help from Congress. The Modernizing Government Technology Act would encourage cloud and COTS adoption by allowing agencies to bank savings from those moves for their next three years of IT modernization. The White House’s budget request offers a similar plan.

The bill, reintroduced in late April by Rep. Will Hurd, R-Texas, and sponsored by Reps. Robin Kelly, D-Ill., and Gerry Connolly, D-Va., should benefit from a Congressional Budget Office score that estimates its five-year cost at $500 million — not the $9 billion in last year’s CBO estimate. The bill passed the House on May 17 and now awaits action in the Senate.

A Not-So-Drastic Change from the Obama Approach

Veteran IT observers could be forgiven for wondering what’s new, given that the Obama administration also pushed agencies to adopt cloud and commercial off-the-shelf solutions as well as a modernization fund. They also set up more innovative projects, such as 18F and the U.S. Digital Service, both funded in the White House’s 2018 budget request.

“It’s been seven-plus years since the Cloud First policy,” Wennergren says. But only 5 percent of federal CIOs reported satisfaction with their shops’ cloud adoption in last year’s PSC survey.

Instead, he says, feds need to avoid a continued overemphasis on work specifications and focus on setting objectives that IT vendors can compete to fulfill.

“Government agencies are far more hampered by how they ask for things than by who they ask,” he says. 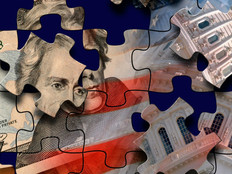