Solid-state drives in data centers endure more stressful lives than their counterparts in traditional PCs or laptops. IT pros expect SSDs to function as workhorses and handle high volumes of data all day, every day.

Enter the Intel DC S3520, a 2.5-inch, 1.2-terabyte SSD designed to handle the workloads of an enterprise server. The drive boasts read performance of up to 450 megabytes per second and write performance of up to 380MBps. Because the drive uses the Serial Advanced Technology Attachment (SATA) interface that comes standard with most servers, installation is easy. Simply unplug the old drive and plug in the new one. Intel also offers upgraded versions of the drive to accommodate formats for the newest servers.

I installed the Intel drive in an HP DL20 Gen9 server, running Windows Server 2012 R2. Once formatted and running, the drive’s performance matched the published specs. This level of write performance is outstanding, as many flash drives won’t reach half that speed and most SATA-based drives top out at similar levels.

The S3520 also offers several energy-saving features that administrators will welcome, starting with advanced power-loss protection. A built-in power storage system ensures any data written to the drive during a power outage will finish before the SSD shuts down.

The Intel drive also requires little electricity and generates barely any heat. Even during intensive writes, it was never hot to the touch. According to the server’s power and heat monitoring system, the hardware ran 1 degree warmer with the drive installed than without it. This means even a large server with 24 SSDs installed is not likely to overstress the cooling system of a server or data center.

It’s in their nature for data center flash drives to be tougher than the storage devices intended for intermittent PC usage. The Intel DC S3520 is no exception. It’s fast, efficient and should last a long time. 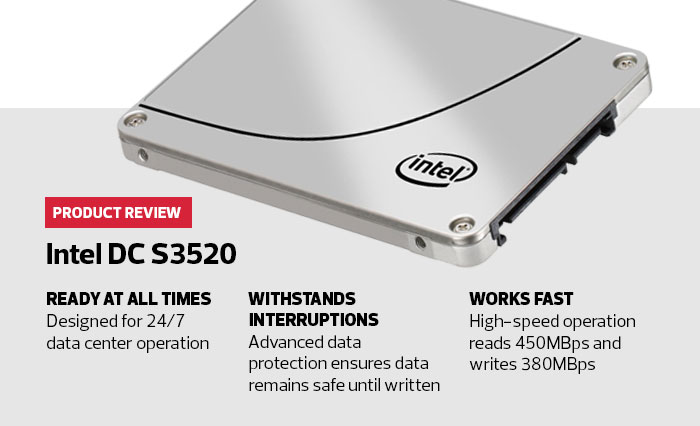 Predicting a Replacement Date for Your SSD

All flash drives have a finite life because each cell in the drive can be written to only a certain number of times, though reads are unlimited. Enterprise SSDs intended for data center use are rated in total data that can be written to the SSD over the lifetime of the drive. For the DC S3520, this number is 2,455 terabytes. This amounts to rewriting the entire contents of the drive more than 700 times.

With hard drives, when a file is changed the new data is usually written to the same block on the disk. SSDs, like the S3520, use a sophisticated wear-leveling algorithm to ensure that all the cells on the drive are used equally, which means that a file is written to a new place every time it’s changed. This helps prevent a frequently used file from wearing out a few cells prematurely.

The drive also supports the Self-Monitoring Analysis and Reporting Technology commands, which allow the server or the storage system where the drive is installed to keep track of the amount of data written to the drive. Perhaps more conveniently, the technology predicts when the drive’s own end of life is near so that it can be replaced before it fails.