Only a few years ago, sailors at the Navy’s sole boot camp, the Recruit Training Command in Great Lakes, Ill., waded through reams of documentation covering subjects from the Uniform Military Code of Justice to officer rank insignias.

But today, recruits assigned to the barracks receive less paperwork and instead are outfitted with tablets.

The move is part of a broader shift across the Defense Department to adopt tablets as a way to engage users, develop operations efficiencies and even minimize collateral damage on the battlefield.

As part of the eSailor program, launched in April 2015, the Navy replaces static training documentation with interactive apps, pushing recruits to connect with the materials, says John Drake, director of strategy and analysis for the Naval Service Training Command.

“Instead of sliding through a PowerPoint or a PDF, recruits go through an interactive module, where they hit links and learn more,” he says. “We want to make the process interactive and offer the opportunity to learn more. We want to assess what they do and don’t understand.”

The eSailor team developed a trivia app that quizzes recruits on their comprehensive knowledge of the military branch, such as matching an officer’s sleeve and collar insignia with their corresponding rank. Text-heavy materials are enhanced with comic book–style illustrations.

The training center chose tablets, Drake says, because they hit the sweet spot between portability and power, with larger screens than smartphones and better battery life than laptops. Recruits regularly use the Apple iPad Air 2, while staff personnel test apps on the Microsoft Surface 3 and the Dell Venue 8. The training center is also considering Android-based Samsung Galaxy units.

But the tablets in this pilot vary from those found at a traditional electronics box store, notes David Coles, the NSTC’s director of information technology management.

The Navy uses VMware AirWatch to limit how recruits use the machines. For example, they can’t download new apps, play games, or surf the web during the training week. On weekends, they’re allowed to use email and access a limited number of internet sites.

Recruits Get Specialized and Secure Tablets

Each tablet at the training center arrives with a MilSpec-grade ruggedized case to protect it from damage. The tablets are not equipped to handle classified data, but if one of the devices went missing, the Navy could use AirWatch to wipe it clean remotely.

The Navy’s tablet initiative also required the service to connect a wireless network to the intranet already in place at Great Lakes. The Wi-Fi network currently includes nearly 100 access points, seven Power over Ethernet switches and a wireless LAN controller, all manufactured by Aruba.

To date, the Chicago-based training center has re-engineered approximately 20 hours of training materials for use on tablets and plans to eventually offer nearly 100 hours, Drake says. When the pilot portion of the program finishes in 2018, tens of thousands of recruits will have received a tablet. “We envision that one day we’ll hand a tablet to a recruit, and he or she will take it from boot camp onward through their naval career,” Drake says.

Tablets Make Paper Forms a Thing of the Past

Like private businesses, the military embraces the advantages of mobile computing, says Jeff Orr, research director for ABI Research. But thanks to more stringent requirements for durability and security, deploying ruggedized tablets that meet federal security standards can cost as much as 50 percent more, he says. That means the DOD at large tends to deploy tablets in narrowly defined situations.

“It’s really about finding the right fit for different mobility scenarios,” Orr says. “Any role that requires you to fill out forms to capture data is an opportunity to go digital.”

In January, Air Force Mobility Command approved Electronic Flight Bags featuring iPads to replace the 120-pound paper manuals that help flight crews for each mission. Leaders there estimate that using the tablets will save more than $4 million a year in fuel and printing costs.

“Smartphone displays are too small to efficiently be used for aircraft logistical operations such as launch, recovery and repair,” Reynolds says. “eTools allow us to reduce cost and bring electronic processes to aircraft maintainers at the point of use.”

The biggest challenge is not operating systems, Reynolds adds. It’s convincing older airmen to embrace the electronic technology instead of the paper copies. But with the advent of tablets, the DOD hopes to make the devices commonplace.

Training and logistics aren’t the only ways military branches are using tablets. With the U.S. Marine Corps, tablets have found their way onto the front lines in Afghanistan.

When troops shout into a walkie-talkie in an urban battlefield, with rounds flying overhead, it can be hard to communicate a target’s exact location, Cuomo notes. With KILSWITCH, Marines on the ground and in the sky are looking at the same grid. Thanks to a secure radio channel, the fire cell officer below can mark the target on the tablet and send it to the aviator, who can then send live video.

“Imagine if I were flying at 20,000 feet and was going to put a Hellfire missile through a window 50 feet in front of you,” he says. “Before I hit launch, I would want to communicate with you and say, ‘Brother, I’m seeing this blue dot right here. Confirm for me that you and none of your Marines are anywhere beyond this blue dot.’ Because we wouldn’t want to lose anyone in our unit.”

No mission is more critical than that. 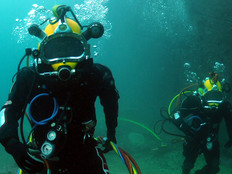