IT modernization involves more than just technology — it requires a new way of thinking.

Now that some of the key pieces are in place for agencies to begin upgrading their technology via the Modernizing Government Technology Act, CIOs should be thinking about long-term and large-scale changes, according to federal IT leaders.

Speaking March 14 at FedScoop’s Federal Innovation Summit, Matt Lira, special assistant to the president for innovation policy and initiatives, discussed the ways in which IT modernizing goes beyond merely upgrading technology.

To achieve long-lasting modernization, agency CIOs need to be empowered and need to focus on change management across the enterprise, Lira said.

Federal CIOs Must Focus on Being Change Agents

Lira hailed the passage of the MGT Act and the Office of Management and Budget’s naming of the seven members of a board that will evaluate agencies’ proposals to modernize their IT systems. The board, chaired by Federal CIO Suzette Kent, is composed of “experts in change management” who have records of driving change in private industry and government, Lira said.

In addition to praising the board, Lira commended Joanne Collins Smee, who heads the Technology Transformation Service at the General Services Administration and is one of the administration’s point people for driving IT modernization through the new “Centers of Excellence” GSA is setting up. Smee has experience delivering change on an enterprisewide basis, which is what the Trump administration is aiming to pursue, Lira said. “We’re trying to elevate that transformation discussion up to the enterprise level,” he said.

The administration wants to take a longer-term view and do more than accomplish IT upgrades in short sprints, according to Lira. The ultimate objective, he said, is to “provide the government with the structural capacity for change management.”

The government’s national security community rarely creates capacities for one specific challenge or threat, Lira said. The IT community needs to take a similar approach and “create change on a generational arc.”

To do that, Lira said, the administration is taking some of the momentum from initiatives started under the Obama administration, such as the Federal IT Acquisition Reform Act, and institutionalizing and expanding them. 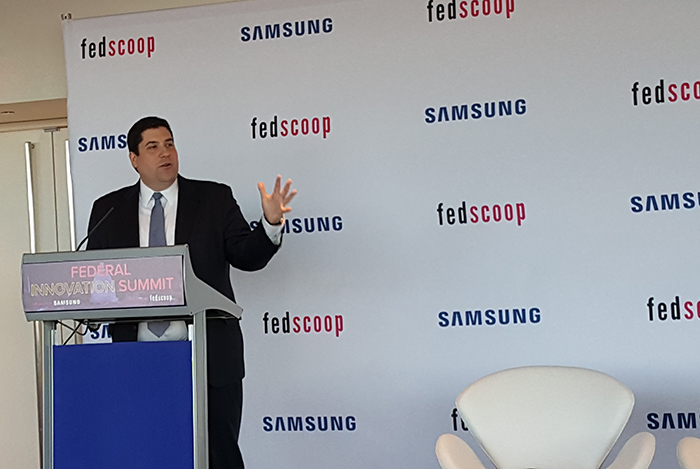 “Even if we could modernize the entire government in an instant — of course we can’t, but even if we could — great companies and great innovators or some kid in a dorm room somewhere can completely change the technology game on an ongoing basis,” Lira said. “The government has to not only be able to modernize in an instant, it has to be able to continually, incrementally modernize itself on an ongoing basis.”

In May, President Donald Trump created the American Technology Council to help coordinate a governmentwide IT vision and ensure that federal stakeholders are communicating with each other as they are making decisions. “It’s taken a little bit of work,” Lira acknowledged, though he said that effort is “getting better every day” and is “significantly better than it was.”

The administration very strongly believes in the role of agency CIOs as “vital, central roles at the agencies driving change.” Lira said the administration is “thinking about other ways to elevate the role of the CIO” because it wants them to be “more than a support function, and to be a true mission player who has mission-level responsibilities.”

Hinting perhaps at an upcoming executive order, Lira said, “You can expect us to continue to take action to elevate and enhance the role of the CIO and CIO Council, and the roles and responsibilities they have at the agencies on an ongoing basis.”

IT modernization is so critical, Lira said, because technology is the fulcrum that enables the desires of the American people to be translated into policies and outcomes that affect their daily lives. Therefore, it’s critical that federal IT staff deliver on the public’s expectations so that they have faith in government’s ability to deliver for them. “As people experience a product that is improved, they will restore their faith in the institutions that are providing those products and services,” he said.