Jack Wilmer, senior policy adviser for cybersecurity and IT modernization in White House Office of Science and Technology Policy, speaks at the 2018 GITEC Summit.

The “massive and complex” process of modernizing government IT is much like untangling spaghetti, with new equipment enmeshed with legacy equipment and not easily unsnarled, a senior White House official said.

“We can’t take the current principles that we have and the current approach that we have and expect any different results than we’ve had over the last 20 years,” said Jack Wilmer, senior policy adviser for cybersecurity and IT modernization in White House Office of Science and Technology Policy. “How do we jump-start the efforts that have already been going on? What are some things we can do to make it faster and, frankly, more effective?”

Wilmer was among the top government officials speaking at the GITEC Summit 2018 in Annapolis, Md., on April 24 who addressed topics ranging from modernization and acquisition to cybersecurity.

IT Modernization Moves Along on Multiple Fronts

The White House has issued a series of reports, memos and executive orders over the past year providing guidelines on how the government should modernize IT and streamline management.

“A lot of really, really good work has already been done,” Wilmer said. “How do we take some of these things that were really good accomplishments and accelerate it, move it to the next level … and at the same time, how do we do a better job of providing for the people we’re supposed to serve?”

Among the projects already under way is the Technology Modernization Fund, a $100 million pool of money for agencies to fund modernization projects; two pilot programs looking at ways to upgrade the Trusted Internet Connections initiative, which standardizes network security across the government; and the much-touted Centers of Excellence project, the first phase of which is expected to be finished this summer.

The Agriculture Department is the first agency to be part of the Centers of Excellence program, and its accomplishments will provide concrete examples for other agencies trying to modernize, Wilmer said. The CoE “is not there to migrate agencies; that’s the agency’s responsibility.”

But it’s a big responsibility, and one with costs in both time and money, he said. “There’s so many other systems that are intertwined, and it’s kind of like spaghetti,” he said. “If you’re an agency that’s staring at a system that’s working, that may not be optimal but there’s enough of a workforce to keep it running and it’s doing its job, there’s a lot of risk, frankly, in modernization.”

Agencies Must Get Around IT Funding Challenges

And then there’s the funding issue: There isn’t enough. Some agencies are taking new approaches to finding modern equipment. Officials from the Department of Homeland Security’s CIO office will be traveling to Silicon Valley next week to “see what we can leverage,” said Barry West, the senior accountable official for risk management at DHS.

With federal research and development funding near zero for the agency and its components, working with private tech firms may be the best way to introduce new, cutting-edge technology to the department, he said: “We have to see if we can get some of these things jump-started.”

“A lot of our components have moved out ahead of us at headquarters,” he said.

This year, DHS plans to cut back on security operations centers; it currently has 16. “It won’t be 16, it won’t be one, but it will be a reasonable number that we can work with,” West said. “There will be a lot of movement in the next 12 months.”

Personnel problems can also hamper modernization efforts, but the former acting CIO of the Veterans Affairs Department, Scott Blackburn, who resigned on April 17, said that the plan to adopt a new $10 billion electronic health records system shouldn’t be affected by his departure or that of VA Secretary Dr. David Shulkin on March 28.

“The plan is still to move forward,” Blackburn said. “It’s basically at the goal line. They’re taking a little bit of a pause, but I’m looking forward to seeing that contract signed in a couple of months.” 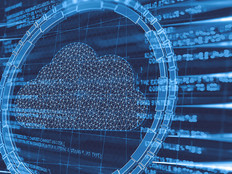