Ken Pathak of the U.S. Army Corps of Engineers, far left, standing on a Corps-managed levee holding back floodwater, uses mobile devices to aid after disasters.

While floodwaters swirled through Texas and Florida, and the hills in California were ablaze last fall, the U.S. Army Corps of Engineers was there, armed with smartphones and mobile apps.

Each of the 885 devices that the USACE deployed in those disaster relief efforts contained two homegrown apps: the Mobile Information Collection Application and BlueRoof, both created by the Information Technology Lab at the Corps’ Engineer Research and Development Center.

The Corps uses BlueRoof to sign up homeowners who lost their roofs in the storm, a program also used in Puerto Rico. That information syncs to a secure ERDC database, where it’s used to assign visits by quality assurance evaluators. Teams assess structures, take photos and record their geolocations. That data is then transmitted to contractors who place a temporary roof — a blue tarp — over damaged areas of the houses.

“What previously took two weeks to get started was accomplished in three days, from the first sign-up to the first roof install,” Pathak says. “MICA has been used for operations management, real estate inspections, flood fighting, debris removal, urban demolition and eco-restoration. The benefits and time savings MICA has brought to these missions has been huge.”

USACE deploys Android and iOS devices in the field, all controlled via mobile device management software that can lock or wipe any device that’s lost or stolen. Web servers receive the encrypted data from the wireless carrier and securely transfer it to servers behind the ERDC firewall.

“Just sorting the paperwork to determine where to send our personnel could take a week or more,” he says. “With smartphones, the data is already compiled and ready to assign to the next phase. The reduction of thousands of man-hours is the true savings smartphones provide.”

Not surprisingly, the military is among the earliest federal cohorts to realize the benefits of 24/7 global connectivity. But each branch has its own ideas about what kinds of mobile technology to deploy and how to go about it.

“DISA relies entirely on commercial off-the-shelf Android and iOS devices which are then customized to the needs of each service,” Marcellus says.

“They’re very similar to devices you can buy in the store. We securely configure them so they have the required data-in-transit and data-at-rest encryption capabilities. We can deliver highly effective unclassified and classified solutions using commercial devices, at pretty impressive pricing, by leveraging the best of commercial technology,” he says.

DISA offers two types of service-level agreements, one for classified devices and another for unclassified. In both, the agency uses MobileIron to manage the devices. Classified units also employ solutions developed by either the National Security Agency’s National Information Assurance Partnership or its Commercial Solutions for Classified.

“We don’t have as much robust ­control or granularity as you might think,” he says. “With a PC, there are a dozen different ways to control any web address you go to. Android and iOS operating systems don’t give you nearly as many choices.”

Marcellus can either allow users to download mobile apps from Google Play or Apple’s App Store, or turn that capability off, “with not much in between. If someone needs a travel app or social media to do their job, we have to come up with workarounds,” he says.

Working at the DOD has never been a 9-to-5 job, Marcellus admits, but having secure, powerful communication devices at their fingertips makes defense personnel more efficient and effective outside the office.

“Years ago, if DOD leaders needed to make a classified call or respond to an emergency, they had to drive back to the office,” he says. “Today you can access classified data, email and telephony in something you can slip into your pocket. The technology allows them to be much more effective, 24/7.”

“The GSA is responsible for about 1.5 million mobile devices, not including laptops, and about $1 billion in annual costs for devices and data plans,” says Jon Johnson, enterprise mobility team manager.

“No two agencies are the same,” he says. “Each has different missions, architectures and security baselines, and each handles different kinds of information. The Defense Intelligence Agency is not going to deploy mobility in the same way the Department of Education or even GSA does.

“Accounting for specific agency considerations, while at the same time imposing uniformity at the federal level to allow each agency to increase efficiency and save money remains the greatest challenge,” Johnson says.

“That’s easier to accomplish with medium-sized, largely homogeneous agencies like the Social Security Administration or the Environmental Protection Agency, where employee needs are similar and agencies can take an enterprise approach,” he says. In larger, more heterogeneous organizations such as DHS or DOD, that becomes more difficult to pull off.

“Prior to the FSSI BPAs, most agencies took an a la carte approach to mobile assets,” Johnson says. “They had no consistency in what they were buying, either devices or in voice and data plans. Before 2012, the average costs were $55 to $57 per device each month. Today, agencies like the SSA have reduced costs to as low as $32 a month.”

Some of the 25 to 28 percent cost reductions stem from price competition in the mobile market, he says. Others are the result of agencies’ standardizing on a single device or carrier. That decision is left up to each agency.

“Some agencies have settled on a platform; others have said, ‘We’re going to allow our users to choose the operating system they want to use,’” Johnson says. “A happy employee is a productive employee. I see the logic in both approaches.”

GSA rolled out a new acquisition gateway platform last year, designed to simplify purchases, make standardization on plans and devices easier, and ultimately save taxpayer money. “If we can standardize the definition of these technologies, whether it’s MDM, endpoint protection or managed services, and standardize the requirements agencies publish and the way they buy these things, that leads to efficiencies and ends up creating savings.”

For the Army Corps of Engineers, the human element presents the greater challenge.

“For many users, this is the first time touching a smart device, and it can be unsettling, as they have their habits with the old ways of collecting data,” Pathak says.

“That’s a fairly common problem among federal agencies,” says Ryan Martin, principal analyst for ABI Research. “Education, first and foremost, is the challenge. It’s about educating the people who are actually using technologies on their benefits, and what they can do to help them in their current role.”

USACE and other agencies also must face the additional challenges of managing the enormous amounts of data those devices can produce, and developing robust apps to support all of the operating systems out in the field.

“These tools can capture data and relay it to the command centers within seconds,” Martin says. “This timely and organized data is critical to saving lives.” 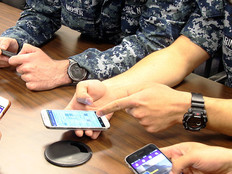 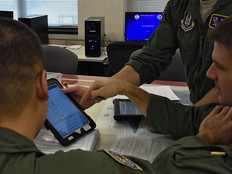 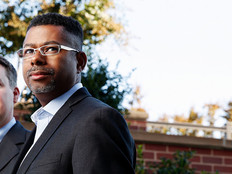