It sits at the heart of virtually every piece of modern IT and communications technology, including desktops, laptops, smartphones and tablets: the humble microchip.

Though it seems impossible to imagine life — much less federal IT — without the microchip, it was not always inevitable that it would become such an integral element of daily activity.

The first integrated circuits were created by firms in the private sector, chief among them Texas Instruments and Fairchild Semiconductor, but the U.S. government played a significant role in supporting the fledgling microchip industry. The Air Force and NASA were among the first customers of the new integrated circuits, using them in missile technologies and space-guidance systems, respectively.

“The federal government's role has been important and wide-ranging,” Anna Slomovic, then a fellow at the RAND Graduate School, wrote in a 1988 paper. “It has made investments in microelectronics research and development, supported the industry in its infancy as a first and major customer, and created a demand environment in which companies had incentives to advance the state of the art.”

Discover how the GRiD Compass, one of NASA's first notebook computers, was used on the Space Shuttle.

HOW  Did the Microchip Get Invented?

In 1955, Shockley formed Shockley Semiconductor Laboratory in California’s Santa Clara Valley, and recruited a group of young scientists dedicated to the development of the semiconductor industry.

They founded what would become Fairchild Semiconductor, and, despite the significant challenges of starting a new company, were able to win a contract to supply IBM with silicon transistors for the Air Force’s new supersonic B-70 bomber. The Air Force needed transistors that were not only capable of withstanding high temperatures, but also fast-switching. Fairchild won the contract largely on the strength of Noyce’s personality, according to the PBS documentary.

In July 1958, Fairchild fulfilled its first order: One hundred silicon transistors at $150 each, or 30 times the going rate for transistors made of germanium. However, Fairchild struggled to reliably produce semiconductors. The reliability of Fairchild’s product was put to the test in 1958, the documentary notes, when it beat out Texas Instruments to supply transistors for the guidance system on the Air Force’s Minuteman nuclear ballistic missile. 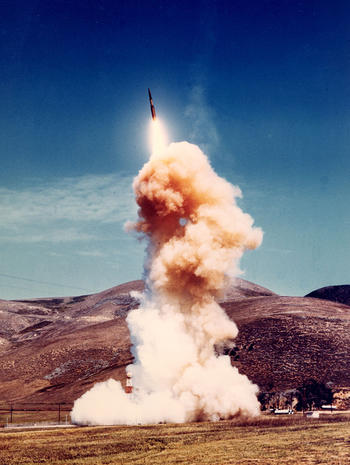 “The Minuteman program was a godsend for us,” Charlie Sporck of Fairchild says in the documentary. “The military was willing to pay high prices for performance. How does the small company compete against the giant TI or Motorola? It has to have something unique. And then it has to have an outlet. Certainly, the military market was very important for us.”

However, Fairchild’s transistors were fragile and frequently failed in laboratory tests. Fairchild needed to fix its product, and fast. For more than a year, according to the PBS documentary, Hoerni had “been working on a radically new transistor design: a thin, protective layer of silicon oxide mounted on top of the transistor,” which became known as the planar process. This process led to more reliable transistors, higher yields and lower costs.

In March 1959, at an industry trade show in New York, Texas Instruments announced that it had patented an entire circuit on a single semiconductor chip, according to the documentary. Developed in the fall of 1958 by Jack Kilby of Texas Instruments, it was the first solid integrated circuit composed of semiconductor elements. Instead of having different transistors performing discrete functions as separate devices, integrated circuits include them all on a single piece of silicon.

Slomovic notes that the Air Force awarded a $1.15 million ($9.83 million in 2017 dollars) contract to Texas Instruments “to design and fabricate circuits that would perform specific functions and would be made of silicon.”

However, as the PBS documentary makes clear, while Kilby’s design came first, it required thin gold wire to be threaded through the individual components by hand. Noyce, building on the planar process, was able to figure out a way to mass-produce integrated circuits.

In the ensuing years, Texas Instruments and Fairchild got into a lengthy patent battle, but the documentary notes that they eventually would agree to share licensing of the integrated circuit.

HOW  NASA and the Air Force Boosted the Microchip

The military provided Fairchild and Texas Instruments with reliable customers at the advent of the microchip era, and the defense industry, along with NASA, helped spur the industry on.

“Military might depended on being able to build these rockets and missiles, and so the Department of Defense was willing to pay almost anything for a lightweight, reliable circuit,” Leslie Berlin, project historian for the Silicon Valley Archives at Stanford University, says in the documentary.

According to Slomovic, “two government procurement decisions were responsible for moving integrated circuits into large-scale production.”

First, in 1962, NASA announced that its prototype Apollo guidance computer would use integrated circuits from Fairchild. Not long after that, the Air Force announced the use of integrated circuits in the Minuteman II missile guidance package. “Although considerable risk was involved in these choices of a relatively new technology, both agencies decided to opt for the high-risk, high-return alternative,” Slomovic writes.

By the mid-1960s, according to the PBS documentary, NASA was buying 60 percent of the integrated circuits produced in the United States. Fairchild was a major supplier, shipping about 100,000 devices for the Apollo space program in 1964 alone.

“It was government that created the large demand that facilitated mass production of the microchip,” Fred Kaplan, author of 1959: The Year Everything Changed, writes in Slate. Kaplan notes: “In 1961, a single chip cost $32. By 1971, thanks to the economies of large-scale production, the cost had plunged to $1.25. By 2000, after the consumer market had vastly expanded, the price of a much more powerful chip would be less than a nickel.”

While the government did not create the microchip, it clearly helped support the industry in its early days. “The government's willingness to take risks on new technology and to promote its use were significant drivers in creating a strong industrial base in microelectronics,” Slomovic says. 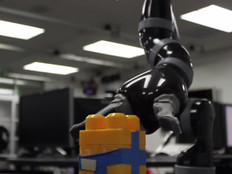