When people think of the federal government, the images that come to mind are of massive marble buildings in Washington, D.C., that span city blocks. But the government exists all over, not just inside the Beltway.

The thousands of smaller remote and branch offices scattered throughout the country need the same high level of cybersecurity as those centralized digital fortresses.

The Fortinet FortiGate 60E security appliance might be a good way to offer that protection. It’s a tiny, under-1U-sized appliance designed for installation at the gateway to a remote or small office.

Most firewalls and next-generation security appliances are difficult to manage, especially ones that pack multiple features into a single box. Fortinet simplified those functions, using a unified operating ­system called FortiOS 5 that drives each component, paired with a graphical user interface that is easy to control.

It’s also simple to create unique firewall rules for the equipment and user needs of each office, and the 60E can store as many as 5,000 of them.

The fact that each feature shares a common interface means learning how to program one equals proficiency with all the others as well. 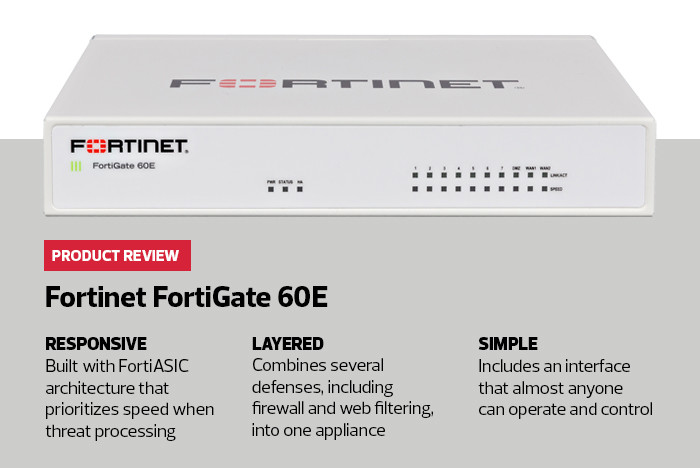 The FortiGate 60E proved more than capable of handling the kind of traffic generated by a small or even a medium-sized office.

In stress testing, it was able to process 25,000 new ­sessions per second and more than half a million ­concurrent TCP sessions with no hint of slowdown, and it’s actually rated to go higher.

The total maximum throughput is 3 gigabits per second, which is probably more than any small government outpost will need.

Given the capacity, however, agencies could configure and protect up to 10 virtual domains, which could come in handy if different agencies share space in the same branch office and need protection that’s tightly configured for their specific missions.

For good protection and ease of use, agencies with small facilities will find the Fortinet FortiGate 60E a good fit.

Reinforcements Are Ready to Assist the FortiGate 60E

The Fortinet FortiGate 60E next-generation security appliance is a powerful defensive tool designed to be dropped into a small or branch office and provide robust protection against a variety of threats — and it does. But it’s also part of a family of appliances designed to work together for even greater security.

I happened to have some Fortinet gear in the lab from previous reviews, including an email and a sandboxing tool. Like the FortiGate 60E, they were built around a common architecture that streamlines throughput and prioritizes quick protective actions.

It’s conceivable that the branch offices of extremely security-minded feds might want a little more protection than the 60E offers; for example, the ability to sandbox files. Thankfully, the common interface makes it easy to add in other Fortinet appliances if needed.

Using the graphical interface on the FortiGate 60E, it was easy to set up an automatic process that sent certain files over to the sandbox for deeper analysis. And it was similarly simple to send them back once complete, or to program automatic actions on the 60E if any threats were found.

Realistically, the commonality between Fortinet devices these days means that adding new appliances almost feels no more difficult than adding a software module.

Offices that don’t mind losing a little bit of the baseline simplicity of the FortiGate 60E can easily add more protection to their defenses, and then still manage almost everything from a central location.