In April 2019, Juliane Gallina stepped into the role of CIO at the CIA, the nation’s premier intelligence agency. Gallina served for 21 years in the Navy, held a variety of positions at the National Reconnaissance Office, and was most recently a partner and vice president at IBM U.S. Federal.

Her blended public/private sector background provides a solid foundation for an agency that has been using more commercial technology to achieve its mission.

In a recent interview at CIA headquarters, Gallina spoke with FedTech Senior Editor Phil Goldstein about her experience, the use of AI in the intelligence community and the agency’s unique “franchise” model for IT innovation.

FEDTECH: How do you think your multilayered background informs the way you approach your job?

GALLINA: When I was offered the position of CIO, I thought it began to make sense of my eclectic background. I felt like each one of those phases of my career at that point could contribute in a unique way. The Navy experience was formative for me, because I grew up in the Navy. I said the oath for the first time when I was 17.

In my early Navy career, I was very blessed because I had opportunities to learn the craft of intelligence while deployed.

In that case, it was signals intelligence, the equipment that you use to exploit that, to capture it, collect it, exploit it, process it, disseminate it, report on it. That whole lifecycle was like Intelligence 101.

The NRO experience was really understanding for the first time how national security investments, major system acquisitions, can have a direct impact on your national security strategy and help win the Cold War.

At the NRO, I came to work with people who were brilliant technologists, engineers, and fell in love with that craft, came to know the CIA through that lens at the NRO.

The industry experience was about metrics, in that, in business, unlike any other place, you are held accountable by metrics every day, every week, every month. And you either make it or you don’t. It taught me a lot about being held accountable, how to hold other people accountable. 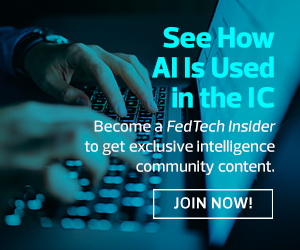 FEDTECH: Intelligence officials over the past few years have said AI is not going to replace people in the field; it’s going to augment their capabilities.

GALLINA: I absolutely agree. I sometimes think artificial intelligence is the incorrect phrase for it, that “AI” should be augmented intelligence, or intelligence amplification, because it’s absolutely to be paired with people. And ultimately, I think the development of effective AI tools is really about understanding how to emulate some human cognitive functions, and then allow people to work with those technologies to either go faster or to offload what might otherwise be tedious, repetitive work.

FEDTECH: At the CIA, does it help speed up things like data analysis or being able to find patterns or anomalies?

GALLINA: Absolutely. Obviously, without going into a lot of detail, I can say in a very general sense that we employ artificial intelligence to do things like augment the work of analysts to improve accuracy and the scale and speed of what they can do, to improve the exploitation of data in all media. Human language technologies in particular are helpful in the triage and translation of foreign language. We’re also finding there’s a place for human language technologies and assistance technology for people with disabilities in our community. And we’re using it with good effect in cybersecurity and counterintelligence.

MORE FROM FEDTECH: Find out why an IT reference architecture model gives intelligence agencies flexibility.

FEDTECH: Your predecessor, John Edwards, implemented the idea of an IT franchise model, based on how McDonald’s operates, to give the mission areas more control in how they procure and use IT, while adhering to a baseline of strict security controls. Are you a fan of the model?

GALLINA: I’m going to have the opportunity in April to meet with leadership and the CIO at McDonald’s. I’m really excited to tell them how much I adore this model and how well it’s going. It has been a delightful surprise coming back into this organization after an 11-year break to see this shift in thinking.

Every CIO I’ve ever met or talked with has been challenged by shadow IT, this idea that at the edge of the CIO empire, there are going to be Jedi knights creating their own counter-­revolution. Well, we have the tool now.

This franchise is fantastic at helping create incentives for people in mission-focused areas, in a decentralized way, to work with the enterprise, and both sides get value.

‘AI’ should be augmented intelligence ... because it’s absolutely to be paired with people.”

The CIO gets to sponsor innovation, and the franchise itself gets the benefit of all the support from the enterprise, has guidance on how to use design guidelines to build to and stay within compliance standards.

The partnership meetings, which we hold frequently, are very well attended by all different franchises. And I’ve seen, in my tenure, organizations volunteer to become franchises, which I think is remarkable. It’s like there’s a pull now to get the services to become a franchise.

FEDTECH: The Directorate of Digital Innovation is the newest CIA directorate. How do you view it as a driver of technology innovation in the agency?

GALLINA: I’m now a native of the Directorate of Digital Innovation because I wear two hats. I’m the CIO. I’m also the director of IT Enterprise, and ITE lives within the DDI. I’m very happy; I think the franchise is an area where we do see innovation, because we’re able to work with these mission-focused end users to help them build things that are going to become part of the enterprise. Ultimately, in some cases they do ­graduate and move from prototype to pilot to scale out, and that’s from within.

READ MORE: Learn about the intelligence community’s move to a new cloud model.

FEDTECH: Is the DDI the vehicle for taking those innovations to an enterprise on a wide scale?

GALLINA: Yes. We also have Digital Futures, which is another organization within DDI. At first, when it was establishing presence, it was very industry-facing, engaging with the whole industry, not just small startups where you conventionally think innovation happens.

I think the franchise is an area where we do see innovation, because we’re able to work with these mission-focused end users to help them build things that are going to become part of the enterprise.”

What I’ve seen in their evolution, which is really cool, is a little bit more of a focus on this idea of “crossing the chasm” — where colloquially, in technology, we say that it’s really hard to get from prototype to production because you have to cross that chasm. It’s difficult to get adoption sometimes, but they’ve been thinking very hard about how you land the enterprise processes and the right people and skills to make sure that tech transfer happens.

FEDTECH: If you project out to 2030 or 2035, what technology are you most excited about that can be used to help the mission?

It’s a candy store of technology, but this brings me back to the first thing you asked me. It doesn’t really matter what the technology is, it’s really more about the people.

FEDTECH: What is your favorite espionage movie or TV show?

GALLINA: This one is really easy: The Hunt for Red October, because it’s a mashup with the Navy and the CIA. It’s like a piece of my upbringing in the sense that it’s really a Cold War piece.