James McGettigan of the National Park Service uses video conferencing to inspire the next generation of park rangers and future stewards of the country’s national treasures. 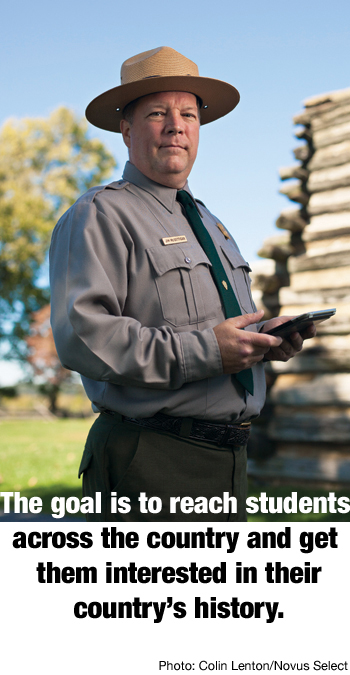 There’s nothing quite as exciting as when learning comes to life for students. That’s why, whether it’s a session on the Cold War for K–12 students or medical training for military doctors, federal agencies are plugged in to video conferencing for education.

Agencies as diverse as the Air Force, the National Park Service and the National Archives and Records Administration are using video conferencing as an educational tool.

Both the NPS and NARA run video conferences for outreach programs with K–12 schools and colleges; and the Air Force, through its Air Technology Network (ATN) at Wright-Patterson Air Force Base, uses the technology to train military personnel across the globe. ATN is part of a larger satellite network, the Government Education and Training Network (GETN), which is a cooperative venture with other federal agencies to share bandwidth and more than 1,300 downlink facilities.

James McGettigan, a senior IT specialist based at Valley Forge National Historical Park in Pennsylvania, runs a video conferencing network that supports NPS distance learning sessions, mostly with K–12 schools. The sessions can originate from nearly any of the 400 national parks across the country, so the subjects range from video tours of Grand Canyon National Park to classes on the immigration wave of the early 20th century at Ellis Island.

“The goal is to reach students across the country and get them interested in their country’s history, culture and natural resources,” McGettigan says. “The idea is to get the students inspired to become the next generation of park service em­ployees and future stewards of these national treasures.”

David Rosenbaum, an education specialist at NARA, also wants to inspire students to learn about American history. Rosenbaum says during his busy time in March he often runs up to 50 video conferencing sessions. Topics range from introductory lessons about NARA to more in-depth classes on the Revolutionary War, the Great Depression and World War II.

“I’m trying to show students that the National Archives is much more than just the Declaration of Independence and the Constitution,” says Rosenbaum, who taught high school history in Nebraska for 27 years.

On the technology front, NPS’ McGettigan says he communicates with the schools through a mix of Polycom and Tandberg equipment. Typically, sessions with students are broadcast into a classroom, school library or an auditorium. Most of the sessions feature chroma key technology, McGettigan says, used much the same way that it would be for a weather report on television, where there’s a green or blue screen behind the reporter, but the viewer sees a weather map. The NPS uses the technique to impose a live park ranger onto a video stream or a static image.

Rosenbaum uses Polycom HDX 8000-series gear to connect with the schools, and has two monitors: a 59-inch Samsung plasma screen and a 37-inch LG 37CS560 monitor that he uses in his studio to view the sessions on his end. Rosenbaum also uses an Elmo document camera to display historic documents.

“Typically, I’ll coordinate the setups with the IT people at the schools,” Rosenbaum says. “For now, most of the connections are from our video conferencing equipment to theirs, but we’re hoping that we’ll soon have permission to run Skype sessions with the schools.”

The ATN’s video conferences are used for interagency distance learning purposes, but the majority of the sessions are for internal education and training of military and civil service personnel.

ATN offers more than 500 courses and provides about 215,000 hours of training annually. For most of the classes, they run point-to-point connections of video conferencing equipment from the instructor’s site to the main ATN hub at Wright-Patterson AFB. That gets transmitted through an encoder and sent over a satellite TV network to the Defense Department and other federal sites around the world.

“Keep in mind that many of our sessions are for one-week or two-week classes that run four to five hours a day; it’s not like a 30-minute online class or a webinar,” Westfall says.

Robert Arnold, senior analyst for unified communications and collaboration at Frost & Sullivan, says ATN’s use of video conferencing is not very different from how large corporations are leveraging the technology.

“The beauty of using video conferencing in this way is that organizations can keep their best-trained educators in front of the audience,” says Arnold. He adds that multipoint broadcasting over satellite is very appealing to large organizations, mainly because it’s cost-effective.

In fact, low cost is the reason Westfall sticks with the one-way video: ATN can deliver the classes at $4.16 per hour of instruction. Westfall aims to be “the cheapest date in distance learning.”

“Our function is mission-centric,” he says. “We need to get them trained quickly and back out on the job.”

A Special Seat at Ellis Island

A lot can come from a video conference. James McGettigan, a senior IT specialist with the National Park Service, relates one example from 2011, when a park ranger from Ellis Island was giving a distance learning session on the immigration wave of the early 20th century to students from Prattsburgh Central School District in upstate New York.

As the ranger explained how the immigrants were processed, one of the students noticed a lone bench in the background. The student asked if the bench had any special significance, and the ranger replied that the bench was an actual seat used by the immigrants. She told the student that at the height of the immigration wave, the benches were in groups of four.

After a subsequent discussion with the park ranger and the high school’s woodshop teacher, Prattsburgh students decided to spend the next semester building new benches. This spring, a ceremony at Ellis Island — complete with the high school marching band — was held to dedicate the new benches. The event was aired live in Prattsburgh for students and parents who couldn’t make the trip.

“Now, these students have a stewardship established with Ellis Island,” McGettigan says. “Their names are now a part of the history of Ellis Island.”

Keeper of the Flame

Along with the hundreds of classes it broadcasts to schools via video conference annually, the National Park Service has also installed a series of webcams at national parks across the country.

One of the most famous is TorchCam, which lets website visitors get a close-up view of the Statue of Liberty torch.

James McGettigan of the National Park Service says before TorchCam could go up, he had to first review the site to ensure that NPS could technically install webcams on Lady Liberty’s torch. NPS park management then met with the Statue of Liberty–Ellis Island Foundation to discuss the project. SOLEIF brought in EarthCam, a company that provides webcam services, to transmit the webcam feeds over the web.

A design proposal was then submitted to the New York/New Jersey Historic Preservation Society for final approval. The entire process took six months to complete. TorchCam went live October 28, 2011, on the 125th birthday of the Statue of Liberty; today, five webcams at the site provide panoramic views of New York Harbor as well as of the iconic torch and Lady Liberty’s crown.

Check out TorchCam at ellisisland.org/TorchCam. For a full list of NPS webcams go to nps.gov/photosmultimedia/webcams.htm.