The NORAD Santa Tracker follows jolly Saint Nick on Christmas Eve, giving kids around the world the opportunity to watch, via the Santa Cam, as Santa delivers gifts.

As we described in a 2010 article, the story of the NORAD Santa Tracker dates back to 1955, when a newspaper ad misprinted what was said to be Santa’s phone number. The number was actually the top-secret phone number for the Continental Air Defense Command. When Col. Harry Shoup answered the phone, he was surprised to hear a young girl asking about the progress of Santa’s journey. Shoup revealed Santa’s location to the girl — and to all the other children who called that night.

Ever since then, the North American Aerospace Defense Command (NORAD) has been in charge of tracking Santa’s sleigh during his trip around the world. Around 12,000 volunteers answer an estimated 75,000 calls each year like the one made on Christmas Eve in 1955.

How does NORAD track Santa’s sleigh? As this article from Wired explains, NORAD keeps tabs on the sleigh with the help of the North Warning System, which is made up of 47 radars spread across the “North Pole.” NORAD tracks Santa from the moment he leaves the North Pole until he returns, after successfully delivering his gifts across the world.

Since the service began more than 50 years ago, the way society communicates has changed drastically, to say the least. Thankfully, NORAD has kept up with the times. As engaging as the program strives to be, it has found multiple ways in which kids can follow Santa’s progress.

Within the tracking system, several different technologies have been put into play to deliver the most accurate display and communication of Santa’s travels. Here are five tech facts about the NORAD Santa Tracker: 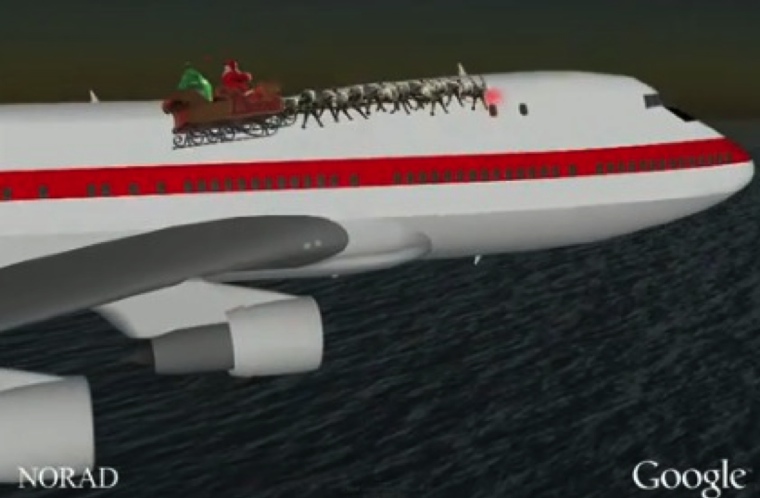 How do the Alaska, Canadian and Continental NORAD Regions Track Santa? Check out these videos to learn more! ow.ly/fWIWt

Kids all over the world can track Santa via www.noradsanta.orgin as many as seven languages. The site hosts a countdown to Dec. 24, which is then replaced by a virtual map powered by Bing, allowing kids to follow Santa across the globe. The site first went live 11 years ago. Since then, it receives nearly nine million unique visitors each year from around the world.

4. The Official NORAD Santa Tracker E-Mail Account Receives More than 12,000 E-Mails from Children Around the World

5. The NORAD Santa Tracker Is Also Available on Mobile Devices

The “NORAD Tracks Santa” app is available for all Apple, Windows and Android devices. The app includes games and a countdown for when Santa’s trip goes live on Christmas Eve, as well as live progress of Santa’s deliveries on Dec. 24.