On the eve of Cyber Monday, Amazon CEO Jeff Bezos announced on 60 Minutes that his company is working on a drone delivery service known as Amazon Prime Air. Bezos, set on disruption, says the drone fleet could deliver packages within 30 minutes, as long as the destination is within 10 miles of a distribution center, and could be active within five years.

The technology is challenging, but Amazon already has drones in its Research and Development offices. The real challenge for Amazon, and for other commercial drone operators, will be the Federal Aviation Administration (FAA). Currently, commercial drones are outright illegal. That obviously presents a significant hurdle for Amazon and other companies, such as UPS, that want to build fleets of drones. The FAA has committed to releasing an updated law that will allow commercial drones by 2015, but according to University of Nebraska-Lincoln Drone Journalism Lab professor Matt Waite's comments in the Washington Post, "the FAA has already said in their road map there are going [to be] significant restrictions on where and when and how those things can fly." 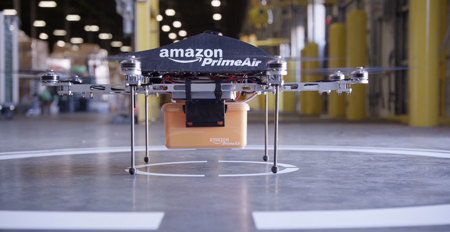 The commercialization of drones is imminent, and many businesses are already planning for the law's arrival in two years. However, that won't be the last of the challenges for Amazon, which plans to use autonomous drones:

But perhaps more importantly for Amazon Prime Air, Waite said, are the parts of the road map which make clear that autonomous drones aren't in the cards any time soon. Bezos said Amazon Prime Air drones would be "autonomous," using GPS coordinates to navigate. But according to Waite, the FAA road map says "there will have to be a pilot in command of the device at all times, which pretty much blows Bezos's dream of autonomous drones carrying packages out of the water." Waite believes autonomous operations are "way down the road," with a best guess of 2020 or 2024 — later than the timeline laid out by Bezos of as little as five years.

What Could Possibly Go Wrong?

Leveraging pilots could help Amazon break into the drone space earlier, but volume could present yet another challenge. Is it likely that the first autonomous drones approved will be a fleet of thousands operated by Amazon? With all of those unmanned aircraft flying through urban areas, accidents are bound to happen, says Quartz:

Delivery drones can explode, or run into things. Unmanned drones are guided by not-always reliable GPS and equipped with metal-bladed propellers and batteries that may be prone to combustion. They’re likely to be impossible to use in many urban areas or anywhere near flight paths for commercial planes. “You’re never going to see them until they hit something. When they suck one of those drones into the engine of an airplane, then it’ll get everybody’s attention,” a former Continental Airlines pilot told ABC news earlier this year.

And we haven't even touched on data. Will the drones be equipped with cameras? And what if the drones defect and join the machine revolution?

The FAA has its work cut out for it.