VA expects the number of users in its TeleMental Health program to triple this year, says Dr. Adam Darkins, the department’s chief consultant for Telehealth Services.

Recalling the early days of video conferencing in large academic medical centers, Dr. Adam Darkins, chief consultant for Telehealth Services at the U.S. Department of Veterans Affairs (VA), says, "Clinicians used to go down to a media center that was laid out with expensive video equipment and controlled by technicians. It was a bit like going onto the bridge of the Starship Enterprise."

These days, workers are more likely to hold a video conference using an IP-based, high-definition camera/monitor combo in their office or a conference room, or they'll conduct video calls from one personal computer to another, using software-based communications tools such as Cisco Jabber.

Desktop video conferencing is an ideal fit for the VA's Home Telehealth program, which the department uses to provide care and case management for veterans with chronic conditions. In addition to off-the-shelf, networked monitoring devices that allow patients to check key vital signs and automatically transmit information to the VA, the program allows veterans and their families to use desktop video conferencing systems from their homes.

"Especially for elderly patients, there can be multiple issues with traveling to a local clinic," Darkins says. "While patients like to see their clinician face to face, many gladly opt for teleconferencing if it can save them from having to travel, park and wait."

Although dedicated video conferencing rooms are still useful for virtual symposiums or other online group events, more agencies, including the VA, Agriculture Department and NASA, have embraced the trend of pushing video conferencing beyond the room and into users' hands, aided by high-bandwidth networks, high-definition hardware and user-friendly unified communications software.

The Power of Seeing Others

Technology may enable desktop video conferencing, but the motivation is as old as humankind — the simple but powerful desire to communicate with others face to face.

The VA's telehealth program has long been a source of innovation. It offers real-time video consultations in 44 clinical specialties, including cardiology, intensive care and mental health. Thanks to the VA's many "tele" specialties, veterans can drive to a local clinic and be seen by a doctor in another state. A technician at the local clinic can plug special medical devices into a USB port in the video conferencing system, allowing the remote physician to, among other things, listen to the patient's heart, examine his or her retinas or zoom in for a close-up of a skin wound.

If these clinic-based telehealth services are like being there, the VA's most recent video conferencing efforts are even better. For example, last year the VA extended its TeleMental Health program to enable VA clinicians to consult directly with veterans sitting at their home computers. It's proved popular with patients and has actually reduced the number of missed appointments.

"In the first year, the program grew to 2,100 users, and we expect that to triple or more this year," Darkins says. "The anecdotal reports we are getting back indicate that the patients really like this. If a patient is dealing with post-traumatic stress disorder, or in some other way is having trouble coping, it can be much more comfortable for them to talk with someone from the safety of their own home."

Elsewhere in the VA, the Board of Veterans' Appeals (BVA) is using video conferencing to assist veterans in another sensitive area — appealing benefits claims. Laura Eskenazi, principal deputy vice chairman of the BVA, says the group started using video conferencing in 1995 to make life easier for veterans. The idea has proved to be a winner on both sides of the camera. It can take many months for one of the VA's 60 traveling law judges to hear a veteran's appeal. Now, if they don't want to wait, veterans can visit a local VA center and opt for a hearing via video conference.

For the judges, video conferencing means less actual travel and more weekends at home (they each still travel two weeks per year for hearings). The BVA saves money on travel expenses and sees a boost in productivity. Over the years, the biggest change has been in the quality of the video conference experience.

"In the early days, with basic tube television, the pictures were grainy and would blink in and out," Eskenazi says. "The difference today is like night and day. The images are so crisp and clean that two minutes into the conversation you forget that the person you are talking to can be hundreds of miles away."

Same as Being There

It is reasonable for agencies to ask if the online experience is materially different from a face-to-face meeting. The BVA is in a unique position to understand such a concern. Does either a video conference or an in-person hearing impact a judge's appeal decision? Apparently not.

"We track that and periodically run the data," Eskenazi says. "We find no statistical difference in the decisions between having an actual face-to-face hearing or a hearing with video."

Most important, veterans appreciate the system. In fiscal year 2013, 51 percent of the BVA's hearings were conducted via video conference, up from 30 percent in 2011 — a new record for the agency.

FNS adopted Cisco TelePresence EX90 desktop systems in some of its offices. Users meet virtually for a variety of purposes, eliminating the need for costly travel, as well as improving communication and collaboration.

"If you can see people with video conferencing every once in a while, as opposed to just talking on the phone, you get a better sense of who they are, and a greater sense of being on a team," Schultz says. "It's really about the ability to simply see other human beings."

FNS especially values video conferencing for its workers in the field. "At FNS, we're over 90 percent laptops now, which means that our workforce is completely mobile," Schultz says. "We have the capability to telework pretty much anytime, anywhere. And we have a fairly strong telework program."

Many FNS workers use Microsoft Lync from their notebooks or desktops for point-to-point video conferencing. Managers also use Lync to video conference with teleworking employees.

For some, video conferencing takes getting used to.

"I've had managers who were initially skeptical about using video conferencing who later came back to me and said, 'You know what? This actually works,' " Schultz says. 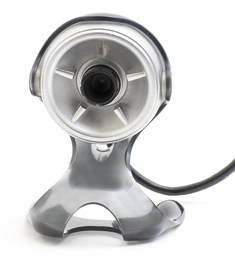 In October 2012, NASA demonstrated the potential for slashing travel costs through video conferencing. For the first time, its annual Executive Summit was run as a virtual conference, including a series of live, online education sessions made possible by Adobe Connect web conferencing software. The savings? $750,000 — on just one event.

Gary Cox, NASA's deputy CIO for IT reform and associate CIO for enterprise services and integration, says Adobe Connect video conferences for the Executive Summit were made possible and monitored by a central coordinator at the NASA Ames Research Center. Now, he says, NASA is excited about pushing desktop video conferencing even further in the agency.

"We currently have a pilot project using Vidyo and are looking at Microsoft Lync," he says. "Others within NASA have been using Skype."

Cox says NASA isn't necessarily looking for a single solution, although he says there's an initiative under way at the Jet Propulsion Laboratory to create a concierge system that can help users identify the best options, based on certain criteria. "Along the lines of, 'How many people will be using the system?' and such," he says.