The promise of greater efficiency and cost savings has made cloud computing a priority investment for the federal government.

Over the past three years, agencies have steadily moved email systems, help desk services and storage capabilities to the cloud. But despite the administration’s ongoing push to adopt cloud-based services, cloud computing accounts for a small percentage of the more than $80 billion agencies spend on information technology.

The GAO report includes spending figures for the General Services Administration and the Health and Human Services, Homeland Security and Agriculture departments, all of which the administration has touted as early adopters of cloud computing. 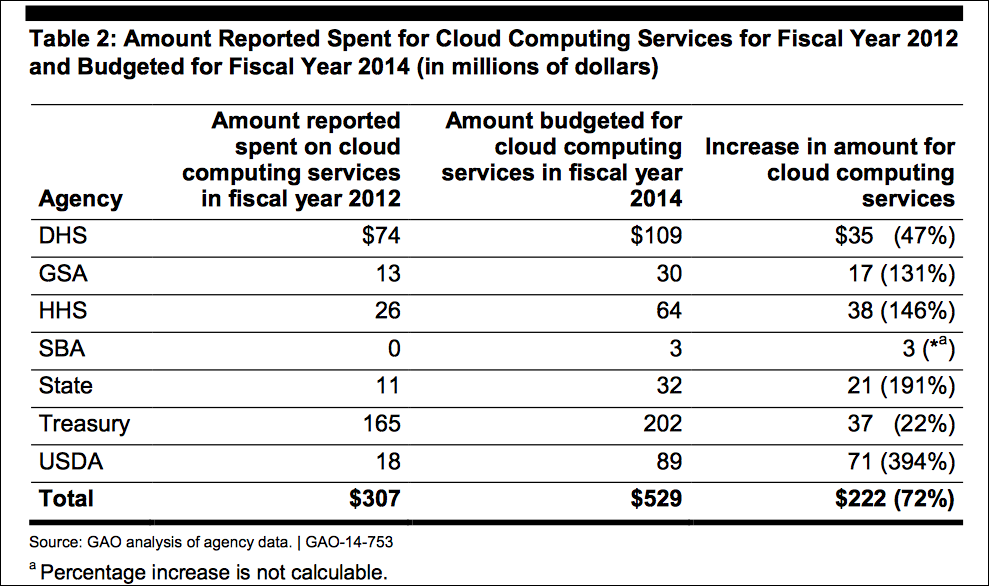 “The agencies collectively reported cost savings of about $96 million from the implementation of 22 of the 101 cloud services,” GAO reported. “These savings included both one-time and multiyear savings.”

That number is nowhere near early projections made by former federal CIO Vivek Kundra, who said in 2011 that he expected agencies would save at least $5 billion in the next year by moving to the cloud. The GAO report doesn’t reveal how much all agencies have saved.

So, why aren’t agencies investing more in cloud services?

Agencies described several factors that have stunted cloud adoption, including the lack of cloud vendors that meet federal security requirements and the need for additional guidance for using cloud services. Much of the federal IT budget is tied up in legacy investments, leaving little money to invest in cloud computing.

Agencies had not yet considered cloud options for about 67 percent of their IT investments because they were waiting for those systems to be modernized or replaced. But GAO explained that OMB policy requires agencies to consider cloud options “whenever a secure, reliable, and cost-effective option exists, regardless of where the investment is in its life cycle.”

The agencies agreed with GAO’s recommendation that they assess all IT investments and determine whether suitable services exist in the cloud. The Treasury Department did not comment on the report.

FedTech wants to know: How is your agency implementing the cloud-first policy?

To learn more about how cloud computing solutions can help your organization get ahead, visit cdw.com/cloud.