Agencies create enormous amounts of data that will only grow exponentially over time. The era of Big Data is upon those in government, where megabytes and gigabytes are being replaced with exabytes, zettabytes and even yottabytes. This is just one of the many initiatives causing an influx in data.

One of the greatest challenges agencies will face is how to store that data in ways that are cost-efficient but also manageable for those who need to access it.

The government showed with the Federal Data Center Consolidation Initiative that the answer to manag­ing a high volume of data is not to build more data centers. Instead, agencies need to create greater efficiencies in their data storage with technologies such as flash storage, cloud computing and storage management software.

Agencies spend 25 percent of IT budgets solely on storage — a sobering number considering data is expected to grow 800 percent over the next five years. It’s imperative for IT managers to find the right storage solution for their environments, which require scalability and the ability to grow with their data while avoiding service delays that reduce productivity.

The Army has figured that out and is making it a key part of its technology future. Earlier this year, Army CIO Lt. Gen. Robert Ferrell released the force’s network modernization strategy, which includes a focus on using cloud-computing projects piloted by the Defense Information Systems Agency to increase storage capacity.

“The transition from disparate data processing and storage solutions to an optimized and responsive global computing and storage infrastructure will be imperative to our success,” Ferrell says.

The Indiana National Guard last year went to a storage strategy that is a hybrid of solid-state and hard-disk drives to run its virtual desktop infrastructure, an area where storage overruns can cause latency and poor performance.

By switching storage strategies, the National Guard was able to save its VDI program, which struggled to work properly using traditional storage technologies that could not handle the demand, most notably from boot storms during the morning work hours.

Here in a Flash

Another technology seeing increased adoption throughout the government is flash storage. A July 2014 report from IDC states that 51.5 percent of IT managers now use flash in their external storage environments — a number that also shows room to grow.

“Flash memory storage is the only technology that supports our VDI and enables low latency and fast throughput for applications that demand exceptionally fast performance,” says GSA CIO Sonny Hashmi, who uses flash storage on the agency’s myView platform.

It’s likely more agencies will turn to innovative technologies to solve their increasingly complex storage needs. The rise in the amount of data is changing government, and those agencies that fail to handle it effectively risk being swamped by it.

1 yottabyte stored on 128GB microSDXC cards would fill half the Great Pyramid of Giza. 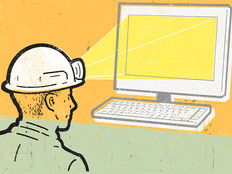