Every December for the last 60 years, the North American Aerospace Defense Command (NORAD) has performed an unusual job: The organization — a joint effort by Canada and the U.S. to provide aerospace warning, air sovereignty and defense for North America — uses its Santa Tracker to keep tabs on the path of Santa’s sleigh on Christmas Eve.

Like everything else in our world, the Santa Tracker is embracing mobile platforms and smartphone apps as a way to reach a new generation of Santa fans.

Over the years, the tracker, which allows children across the globe to track the flight of Santa’s sleigh, has evolved from an operation that relied on radio stations to broadcast Saint Nick’s path to a multiplatform operation, complete with its own smartphone apps.

How the NORAD Santa Tracker Got Started

It all began with an honest mistake. In 1955, after a Colorado Springs–based Sears Roebuck advertisement mistakenly used the telephone number for the Continental Air Defense Command, children hoping to speak with Santa wound up being connected to the CONAD "hotline."

After some quick thinking, Col. Harry Shoup, the director of operations at the time, had his staff check the radar to see when Santa was leaving the North Pole to deliver presents. Children who called were given updates on his location. With its formation in 1958, NORAD took over the responsibility of tracking Santa every year.

According to NORAD spokeswoman Maj. Jennifer Stadnyk, NORAD put together a series of radio spots on records that were distributed to radio stations throughout the 1950s, ’60s and ‘70s. The stations would then play the pre-recorded ads at certain times on Christmas Eve to let children know Santa’s location.

In the mid-1990s, NORAD set up an operations center, with volunteers manning phone banks to answer kids’ queries on Santa’s whereabouts. The Santa Tracker website launched in 1997 and has evolved significantly since then. For example, the current website is now available in eight different languages: English, French, Spanish, German, Italian, Japanese, Portuguese and Chinese. Stacey Knott, program manager for NORAD Tracks Santa, said that 40 to 50 percent of Santa Tracker users are accessing the tracker via smartphones and tablets.

The apps sport many of the features found on the Santa Tracker website, including games, short video clips, Christmas music, information about NORAD, ways to contact NORAD on Christmas Eve, the countdown clock leading up to Christmas Eve and, of course, a gift shop selling hoodies and T-shirts. On Christmas Eve, the app will produce a map that users can look at to track Santa’s location.

Knott said that most of those who use the Santa Tracker apps are under the age of 12, but many adults, including those without children, have used the apps.

Last year, around 1,500 volunteers, working in two-hour shifts over a 35-hour period leading up to Christmas morning, fielded 130,000 calls and answered 6,500 emails. The Santa Tracker website also had more than 21 million unique visitors from 234 countries and territories, according to Stadnyk.

NORAD isn’t planning any significant changes for the 60th anniversary of the Santa Tracker, other than adding a diamond to its logo. 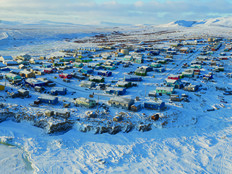