Lawmakers in Congress continue to debate the best way to fund federal IT modernization. For the General Services Administration, the debate is almost beside the point: top GSA officials say they will partner with agencies to replace their outdated technology.

GSA officials acknowledge that they need to engage in constructive dialogue with industry, as well as key stakeholders from agencies and American citizens, if that mission is to be successful.

Earlier this month, the GSA held its first ever “technology industry day” to highlight how the independent agency is working to update legacy IT, especially through its new Technology Transformation Service (TTS). The GSA launched the TTS in May to serve as a one-stop shop for agencies looking to build, buy, and share user-centered and emerging technology solutions.

Engaging in Dialogue to Modernize IT

TTS houses 18F, the Office of Citizen Services and Innovative Technologies, and the Presidential Innovation Fellows program. GSA Administrator Denise Turner Roth said that the TTS is still establishing itself and noted that GSA needs to be a helping partner.

“As GSA is moving and changing, it does have an effect on our partner agencies, as well as our industry partners, as well as those who are ultimately receiving the service — the American public,” she said at the Sept. 8 industry day event, according to FedScoop. “And so as a result, we want to make sure that the changes that we're making internally are not mysterious, but rather there is a common effort and partnership that is occurring between us and our stakeholders to really be able to move forward in the most effective way possible.”

Roth said GSA is open to finding the best ideas and paths forward for modernizing IT and acknowledged that it will not have all of the answers, FedScoop reported.

Aaron Snow, executive director of 18F and deputy commissioner of TTS, said that the new technology service will help agencies by taking on “first-move risk,” as agencies seek to adopt new technologies.

“We can get out and provide examples of new, modern methodologies, modern tools,” Snow said, according to FedScoop. “And if it doesn't work — well then we turn that into a teaching moment.”

Roth told Federal Times on Sept. 19 that she wants TTS to be the government entity that demonstrates emerging and innovative technologies. “So that’s everything from the implementation, the exploration of what’s coming on deck for technology that can be applied in government, and then understanding how we can actually make it be adaptive for use,” she said.

Additionally, Roth told Federal Times that she believes GSA “serves an important integration role in bringing together federal government agencies as well as industry.” She said a key goal of GSA is that “we understand what the vendor opportunities are, we understand where industry is going and we make the path to getting to federal agencies easier so that our agency partners are actually getting the best quality and opportunity with the services that they need or the products that they need.”

Moving Forward With or Without Congress

The topic of IT modernization came to the forefront in February after the White House proposed a $3.1 billion IT Modernization Fund (ITMF), a revolving fund that would help agencies upgrade their legacy technology. Federal CIO Tony Scott has been pushing for the fund, but has also said he is open to discussing other competing proposals floating around Congress as companion measures.

Last week, the House Oversight and Government Reform Committee approved a bill that combines parts of the proposed IT Modernization Act and the MOVE IT Act (another proposed bill to modernize outdated equipment). According to FedScoop, the bill approved by the committee, the Modernizing Government Technology Act, would create individual IT working capital funds for each of the 24 CFO Act agencies and a centralized IT modernization fund within the Treasury Department that agencies could apply to for funding.

However, as Federal News Radio points out, it’s far from clear that the compromise will become law, especially because many agencies already have working capital funds and the bill would not give an agency CIO explicit authority over them.

Yet the GSA is not waiting around, and GSA CIO Dave Shive said at the industry day event that while the White House’s ITMF is a “sound and solid” proposal, the government needs to move forward on IT modernization with or without a law that authorizes it.

“ITMF takes into account a couple of realities about how money is spent in agencies right now and tries to solve those problems by creating a single fund to act against modernization,” he said, according to Nextgov. “But if ITMF if not passed, it does not negate the need to modernize IT in government. All the smart people who exist in government and our industry partners alongside us will have to think of creative ways to make modernization happen.” 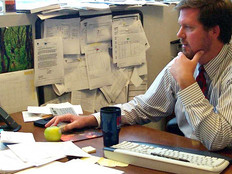