IT modernization is all the rage right now, as agencies update legacy systems and Congress debates how best to fund such upgrades across government. Federal CIO Tony Scott has been a major proponent of such efforts, but as he enters what is perhaps the twilight of his tenure, Scott is urging agencies to think bigger and broader than mere modernization.

The government’s IT chief wants agencies to embrace digitization, and entirely rethink how government services are delivered, with the customer — American citizens — in mind.

Scott also thinks there is a good model the country can follow: Denmark. Speaking alongside Lars Gert Lose, Denmark’s ambassador to the United States, at Tuesday’s closing session of the 2016 ACT-IAC Executive Leadership Conference in Williamsburg, Va., Scott made a pitch for a new way of thinking about government technology.

A New Approach to IT

Just as he did last week, Scott criticized a federal IT model in which IT infrastructure and systems mirror an agency’s organizational chart, and services are pushed out to citizens without much thought. He joked that the Surgeon General should place a warning in federal IT workers’ offices: Such ways of doing business are “hazardous to our health.”

Lose outlined how Denmark approaches the delivery of government services and the technology it uses to do so, noting that because of the extensive welfare state in Denmark, it is imperative that the government modernize its IT and be efficient in how it delivers services. That builds up trust among citizens, he said.

In 2015, Denmark started mandating that citizens move away from paper forms and use digital forms and platforms when interacting with the government. All government agencies also became obliged to use the same digital platform.

“Trust is a result of good service,” Lose explained.

Scott acknowledged that in the U.S., states have a great deal of power and authority, and implementing such a solution here would present a more arduous task than in Denmark, a largely homogenous country of 5.6 million. However, he agreed that trust is key, and wondered what kind of mess the U.S. banking system would be in if banks had not agreed long ago to accept other customers’ ATM cards and secure that information.

“In government we’re just a little bit slow in thinking through some of those hard problems” and deploying solutions, though he cited 18F’s ongoing effort to create a shared authentication portal, login.gov, as an example of how government is moving in the right direction.

Speed and customer satisfaction are the keys to helping building trust in government, Scott said. IT modernization is not merely about replacing old printers with newer ones.

“What I really think we should be thinking about is digitization, really reimagining the whole business process in the first place,” he said. “Do I need to print that thing out at all?”

Scott noted that his car registration and title in Florida is now purely digital; it can be processed and accessed on a smartphone, without ever having to go to the Department of Motor vehicles. Citing a small but fitting example of how government can rethink how services are delivered, Scott asked, “How do we change the interaction in a way that is customer-centric and customer friendly?”

The retail and healthcare industries are rethinking how they do business to avoid having customers wait for services or check out, Scott noted, and that needs to happen in government.

Public Sector IT Lessons from Denmark

How has Denmark approached IT modernization and government technology? Lose noted that the government is involved in most major life events in Denmark and has developed a high level of trust with citizens. He added that 88 percent of those aged 16 to 74 have interacted with the government on a digital platform in the last 12 months.

Denmark has spent decades building its IT infrastructure, and in 2011 it launched the Agency for Digitization to speed along digitization efforts. As a result, Lose said, Denmark has “increased efficiency tremendously,” especially for the elderly, and the shift to an all-digital mode of citizen-government interactions saving about $330 million per year while providing better services. Denmark has a single digital platform for government agencies to use and an encrypted ID passcode for citizens to use when interacting with government services.

The Danish government needed to take these steps to bring down costs, Lose said. The country has benefited from the fact that when governments change, IT leadership at public agencies does not, he said, and that digital modernization has broad political support.

However, Lose said the Danish government relied on only the private sector to develop the technology solutions it needed to move to an all-digital world. The challenge going forward, he said, will be for government agencies to create a structure that is responsive to new technologies.

As Denmark embraces that all-digital world, Lose said, cybersecurity will be a key concern, as will user-friendliness. Denmark is looking to use biometric security controls to enable the delivery of digital services on citizens’ smartphones.

Scott said that as the U.S. tries to follow Denmark’s lead, he wants to witness a greater embrace of unsolicited proposals from the private sector and from entrepreneurial federal IT workers. “The notion that someone in the IT or procurement organization is going to think of the best way to do something and put out an RFP, and that is going to generate the best way for us to approach any problems, is just silly,” Scott said.

“People won’t hate government it works and if it serves them well,” Scott said. “Digitization starts us down that path.” 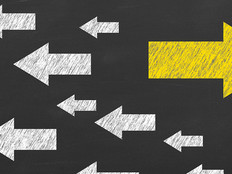