The federal government is in the midst of what some have called a ­“silver tsunami,” with baby boomers retiring from agencies in droves. This wave could see up to a third of federal employees leaving their posts within a few years, according to some estimates. Many agencies will need to turn to ­millennials — those born in last 30 years — to fill vacancies.

Unlike the workers they’re replacing, millennials grew up with computers and the internet. While baby boomers adapted to advances in IT over the course of their careers, this younger cohort is composed of “digital natives,” some of whom have been online since they were in diapers. This presents both an opportunity and a challenge for agencies: Younger workers can bring new ideas about how to use technology to improve operations, but they also have lofty expectations for enterprise IT, and may quickly lose patience with clunky legacy systems.

“Millennials look at IT differently,” says John Moses, director of the Solutions Development Division at the Nuclear Regulatory Commission (NRC). “They demand greater mobility, increased capabilities on par with commercial organizations, and greater agility. That pressure is good. It keeps us in tune with the general public.”

In 2014, according to the Bureau of Labor Statistics, millennials made up slightly more than a third of private-sector employees, but just under a quarter of government workers. The goal, it would seem, would be to entice these recent college graduates and first-time job seekers to choose the federal government for a career in IT.

“I don’t believe we have enough of a mix of millennials working for us, like you see in private industry,” says Marlon Andrews, deputy CIO and acting chief technology officer at the National Archives and Records Administration (NARA).

“Especially in the IT field, they know the latest and greatest technologies,” Andrews says. “At NARA, our mission is to provide ­information to the public, and I think they have a better perception about how to reach the public. They’re the ­target audience for people who use the web, more so than people who are not millennials.”

Making IT Modern and Easy to Use

Millennials want their notebooks, devices and other electronic tools on the job to be top of the line. A federal workplace that showcases a host of legacy systems that run slowly and are in need of major upgrades will be a significant detriment to a millennial job candidate.

“If you are consistently being docked by users for less-than-great technology, you’ve got a serious problem on your hands, and it’s only going to get worse,” says Kyle Lagunas, research manager for talent acquisition and staffing trends at IDC. 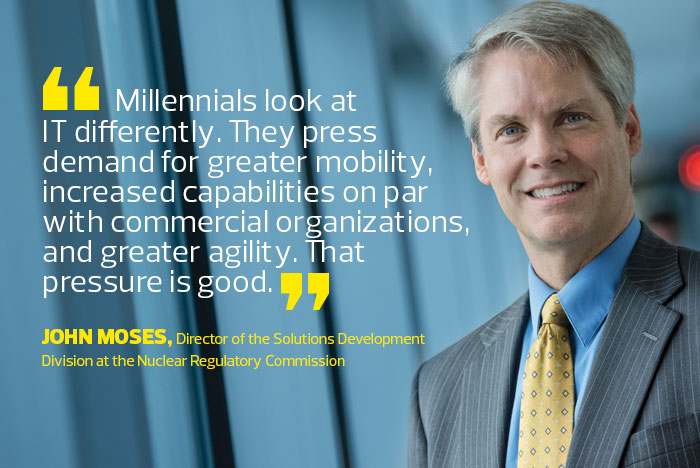 While agencies might feel particular pressure to make tech upgrades to satisfy younger users, Lagunas says that “we’re all millennials” now — meaning that users of all ages have come to expect easy-to-use IT systems that make them better at their jobs.

“Technology now either limits or enables performance,” he says. “It either enables a highly productive organization, or it holds back an organization from reaching its full capability.”

At the NRC, Moses says, younger users worked with his team to help create a configurable workflow system to help with the drafting of nuclear power plant review standards. The software system allows users to complete steps when they want to, regardless of order (Moses compares it to the popular tax software TurboTax), and also enhances collaboration.

“It captures knowledge that is ­currently on a sticky note or in a desk drawer or in somebody’s head,” Moses says. “The process hadn’t changed in decades, but this new solution brings it into the 21st century. It’s going to improve standardization, improve knowledge transfer and probably make it a more rapid process while improving quality.”

While smartphones and tablets didn’t become widely available until late into the careers of most baby boomers, many millennials have had access to mobile devices since they were in high school, and they expect to be able to continue using them in the workplace.

Moses says that roughly a third of NRC users are enrolled in the agency’s bring-your-own-device (BYOD) program, while some other workers are outfitted with agency-owned devices. “A lot of our millennial workers were excited to switch out of an organization-provided device and go to other smartphones that are more capable,” he says.

While NARA doesn’t yet support a BYOD program, Andrews says he understands the appeal of such programs to younger users. “I think that’s important for millennials,” he says. “It’s something that we need to look at to support our workforce.”

When discussing the difference between millennials and previous ­generations, observers often highlight the value that today’s younger workers place on work-life balance. Many agencies have flexible telework policies, supported by technology that allows users to work remotely. This may give federal recruiters a powerful tool for attracting and retaining millennials.

In Andrews’s department, workers can telecommute one day per week after they’ve been with the agency for 30 days. After their one-year anniversary, users can telework two days per week.

NARA uses Citrix XenApp to support the telework program, and the tool is also part of the agency’s plan to ensure business continuity in case a disaster or emergency cuts off access to the agency’s headquarters.

“Telework has come to be expected in the federal workspace,” Andrews says. “That’s for everybody, but I think it’s even more important to millennials. I’m in my mid-40s, and working from home is a ­relatively new option in my career.”

Constructing a Pipeline of Younger Workers

In 2009, the State Department created the Virtual Student Foreign Service (VSFS) internship program, leveraging telework tools to give college students the chance to gain experience with ­government work. At the same time, they created a pipeline for recruiting. Thousands of students have participated in the program, which now includes 32 agencies and continues to be managed by the State Department.

“Students participate from wherever they are,” says Jameela Akbari, chief of the strategic workforce planning staff in the agency’s Bureau of Information Resource Management.

“It could be a Starbucks,” adds Derwood Staeben, director of recruitment, examination and employment in the agency’s Bureau of Human Resources.

The State Department is also looking into replicating existing fellowship models specifically to recruit IT workers. The Charles B. Rangel Graduate Fellowship and the Thomas R. Pickering Foreign Affairs Fellowship both aim to attract and prepare young people for careers in the State Department’s Foreign Service Office, providing funding to participants who commit to the Foreign Service for at least five years. Staeben says that same model could help the agency attract technology workers willing to start their careers abroad.

“We have to acknowledge that the economy is doing well, and we have to compete with the private sector,” says Staeben. “We’re looking at our staffing needs 10 years out, and the question is, how do we create a pipeline to find high-quality candidates who are willing to spend the bulk of their careers working overseas?”

Agencies won’t likely attract millennials simply by spending more money on IT. Instead, they must listen to their younger users and give them access to the types of tools they need to do their jobs. In addition to creating a more enticing work environment, this approach has the potential to yield ­tangible business benefits.

“Sometimes, as we get more bureaucratic, that’s dispiriting to millennials,” says the NRC’s Moses. “But if you give them autonomy, they’ll solve problems, and they’ll do it in a faster and more creative way than you could have imagined. They’re more willing to try things, rather than being used to the old things.”

“Adoption of new technologies for the pure sake of adopting new technologies is a horrible idea,” says IDC’s Lagunas, stressing that agencies should have a specific goal and end result in mind when making new IT investments. Lagunas says agencies can use IT to help build the sort of organizational culture they want to support. “If your organization values collaboration, and you don’t have any technology or tools to support collaboration, that value is kind of empty,” he says.

“People want to work on an A-team, for an effective organization,” he adds. “And if the organization isn’t making investments in systems and infrastructure to support that kind of performance, the best people aren’t going to stick around for long.”

Moses agrees with that prediction, noting that millennials like to work together to come up with solutions that will drive this ever-changing t­echnology industry forward in the coming decades.

“This is the generation that invented hackathons,” says Moses, referring to the events where IT industry workers collaborate on ideas and projects. “They’re the most proficient users of smartphones. They’re the ones starting the new startups. They’re really driving this IT industry that’s driving so many sectors. I do think we have to adjust, and I think we have to look at where their strengths lie. And the truth is, these people grew up with technology that is changing our lives.”

1. Millennials have higher turnover rates than previous generations.
Fact: According to Deloitte’s analysis of Census Bureau data, the turnover rates for millennials in government are lower now than they were for Generation X workers in 2006. When young workers leave government jobs, the report says, they do so largely because of their age and the business cycle, rather than because of a “generational propensity” to job-hop.

2. Millennials are less passionate about government jobs.
Fact: Federal employee engagement has been declining across generations since 2010, which Deloitte says may be attributable to pay freezes, government shutdowns and fiscal uncertainty. Still, millennial workers in government are as proud of their employers as Gen Xers were at the same age, with 95 percent of millennial government workers agreeing or strongly agreeing with the statement “I am proud to work for my employer” in a national survey.

3. It’s harder to recruit millennials.
Fact: After the economic crash in 2007, federal agencies cut back their recruiting efforts and have not yet returned them to previous levels. This makes it difficult to determine whether millennials are harder to recruit to federal positions. No evidence points conclusively either way. However, a 2013 poll by the National Association of Colleges and Employers found that 25 percent of college students considered government among their top three career choices. 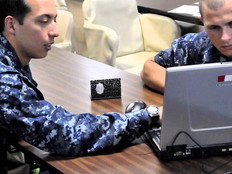 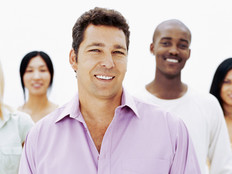