International Space Station Expedition 42 Commander Barry "Butch" Wilmore shows off a ratchet wrench made with a 3D printer on the station.

Astronauts can see from the International Space Station that the Earth is a three-dimensional object. They can also print such objects onboard their vessel.

NASA helps astronauts print out mission procedures and photos via specialized 2D printers, but also gives them the ability to use 3D printers to make handy tools and other parts they may need. For now, 3D printers are used to get those tools into the astronauts’ hands in a speedy fashion. In the future, NASA envisions using 3D printing to create entire habitats or landing pads for use on other planets.

“With the advancement in advanced manufacturing here on Earth, new opportunities like 3D printers have come into play and are technically viable for us to use in space,” says Jason Crusan, director of the advanced exploration systems division within NASA’s human exploration and operations mission directorate. 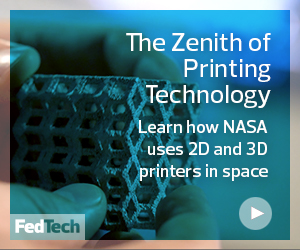 3D printing aboard the ISS came about as a result of asking crew members to look at the parts inventory aboard the space station, Crusan says. NASA and the astronauts looked at items that broke the most often, and then tried to figure out if those could be created using 3D printing techniques.

Every crew member has a plastic wrench that has the standard socket to manipulate all of the racks and other standard parts aboard the space station. “And they have a tendency of misplacing those wrenches from time to time, so the ability to create a new wrench was on the top of peoples’ lists,” Crusan says.

According to Crusan, extruder heads for some of the 3D-printed ceramics, 3D-printed electronics and electronic wiring “are really, really expensive to buy commercially today.” As a result, at NASA’s test facilities at the Marshall Space Flight Center, the space agency actually prints the printhead itself there, because it costs less than buying a commercial one.

NASA wanted to test how long it would take for astronauts to 3D print something — from the time it takes to come up with an idea to actually having the object designed and printed. The first idea was to print the common wrench.

“We shared that with our design team, including our partner Made In Space, and said, ‘OK, can we do a wrench and print it?’” Crusan says. “And in a very short period of time, meaning a day or two, we basically came up with a design for that wrench, transmitted the electronic file, uploaded it to the International Space Station, and printed it out.”

That demonstrated that if astronauts faced an emergency situation, NASA had the ability to be responsive to their needs. That’s crucial because there can be quite a while in between commercial cargo flights to the ISS.

Currently, the 3D printers it has in orbit are all focused on printing plastics, specifically acrylonitrile butadiene styrene plastics, and NASA is advancing to higher quality aerospace plastics as well, according to Crusan.

However, he says, NASA is still a long way away from understanding how much feedstock — the materials which are actually “printed” to create the final object — is needed in space.

MORE FROM FEDTECH: Find out NASA lets astronauts print in any orientation!

What Is Next for 3D Printing in Space?

NASA sees a bright future for 3D printing in space. 3D printing and advanced manufacturing opens up “a whole new ability for humans to live off the planet,” Crusan says.

For example, what happens when astronauts get to the surface of wherever they are going? If it’s the moon or Mars, astronauts are going to need somewhere to live. “Even if you land a habitat, like your house, you may still want to use the dirt, the regolith that’s there on that planet to actually build up radiation protection,” he says.

NASA could potentially send robots down to the planet’s surface ahead of time and 3D print a landing pad and berms to keep the dirt “from flying all over the place whenever a rocket goes to land or take off,” Crusan says.

NASA is also creating a refabricator, which is going to be the first device the space agency knows of that performs recycling and printing all in one device, according to Crusan. The device will be flying up to the space station this fall.

“And our primary purpose here is not so much advancement in the printer itself, because we’ve been understanding that a lot, but to understand how many times you can print the same material until the material properties change,” he says. “How many times can you reuse it? Is it 10? Is it 20 times? How does that material change over time? Because the last thing you want to do is print a part that you want to rely on, then it breaks, or it becomes too brittle.”

Crusan says NASA envisions 3D printing habitats and landing pads in addition to all the tools astronauts need. “That is a significant change in the way we view human spaceflight planning from today,” he says.

For more on how NASA prints in space, visit our Feds in the Field video series page.