For nearly a century, the U.S. Marine Corps has called San Diego home. In 1921, the Marine Expeditionary Advanced Base began operations in the city. Two years later, the Marine Recruit Depot for the West Coast moved from Mare Island Navy Shipyard in Vallejo, Calif., to the base in San Diego.

Lately, Marine Corps Air Station Miramar, part of the Corps’ presence in the city, has taken steps to become energy independent from the city in the event of an energy disruption or shortage, as the Defense Visual Information Distribution Service reports.

“MCAS Miramar has nearly completed its microgrid system, which will be monitored and managed out of a newly-built Energy and Water Operations Center,” the publication notes.

Now, the Marines are building on those efforts via a new agreement it signed with San Diego to collaborate on smart city technologies such as unmanned aircraft systems, smart streetlights, renewable energy and other applications.

As part of the new memorandum of understanding between the city and the Marines, they agreed to work together to “foster collaborations between the parties on ‘smart city’ topics of mutual interest in support of each organization’s respective goals in the areas of protection, resilience, maintenance, mobility, operational reach and community.”

“We’re building on the long tradition of collaboration between the U.S. military and the city of San Diego and taking that partnership to the next level for the betterment of the San Diego region,” San Diego Mayor Kevin Faulconer said in a statement. “We will share our experiences, share our discoveries, and share how advanced technology can benefit the people we serve.”

“We’re proud of supporting the community because we are the community,” Marine Corps Maj. Gen. Vincent Coglianese said at an event announcing the partnership alongside Faulconer, according to NBC San Diego. “We’re a part of San Diego.”

VIDEO: Watch federal IT leaders bust some common myths about the Internet of Things.

How San Diego Will Become Smarter in Tandem with the Marines

The agreements notes that the city and the Marine Corps will hold monthly conference calls and conduct semiannual in-person meetings to discuss smart city projects with which the parties have a mutual interest. They will also set up several working groups around protection and security, mobility, and public works.

The agreement references ongoing projects at Marine Corps Air Station Miramar in San Diego that are focused on renewable energy and water conservation. The projects have implications for city mobility, energy and water, the MOU notes. “The projects include installing new solar panel fields and other infrastructure to make the base independent from the surrounding grid and water-reuse equipment,” StateScoop reports.

Meanwhile, there are several existing city technology efforts that “have applicability to the military community throughout the region as well as potential unique applicability on” the Marines Corps’ local installations as well.

Those efforts include smart streetlights. In 2017, the city installed 3,200 smart streetlights with sensors that reduce energy costs by 60 percent and turn them into “a connected digital network that can optimize parking and traffic, enhance public safety and track air quality,” according to a city statement.

Another is the city’s Get It Done application, which it launched in 2016. The mobile app allows San Diegans to “easily report problems and request improvements for their neighborhoods,” according to a city statement. The app uses GPS data embedded within photos to “automatically update the address and location of problems,” the statement adds.

San Diego and the Marines will work together on a variety of programs, including drones. Last year, the U.S. Transportation Department picked the city to advance the testing of drones, grow the innovation economy and create jobs, according to statement from the city. As part of the agreement, the city will request the inclusion of the Marines as one of the more than 20 partners in the San Diego region’s consortium for the pilot program.

The Marines are not the only service branch interested in smart city partnerships. Lt. Col. Lloyd McDonald, commander of the 42nd Communications Squadron at Maxwell Air Force Base in Montgomery, Ala., tells FedTech that while the base’s smart city applications are “totally base-oriented,” the base has had “discussions with the city of Montgomery as they move forward with their own smart city project.”

“We’re looking at areas where our interests coincide, and where Defense Department rules for public-private partnerships might allow us to partner on different pieces of technology insertion that would benefit not only the base, but also the city,” he says. 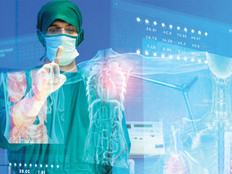