Adding a new partner to a teleconferencing system seems like an easy IT job, but for a government intelligence agency, modernization isn’t always that simple.

The Defense Intelligence Agency wanted to include its partners in the Five Eyes intelligence alliance — Australia, Canada, New Zealand and the United Kingdom — on video teleconference calls, but was stalled by the details of a memorandum of interest.

“It took me two years,” said DIA CIO Jack Gumtow. “It wasn’t technically difficult to do; it came down to a policy issue: trying to get the right people to break that down and understand why you wrote that policy in 1989 and why it’s no longer relevant in 2018.”

Overcoming technical policy issues and cultural bias remains the biggest hurdle to modernization in the intelligence sector, Gumtow said in an interview with FedTech at the 19th DoDIIS Worldwide Conference in Tampa last week.

Gumtow ran into a former coworker at the conference, which attracted 3,700 people, and the coworker was skeptical of efforts to work with the Five Eyes partners, wondering if they could be trusted with American intel.

“That is a cultural bias that we need to change,” he told FedTech. “We go into war, we go into conflicts, those are our partners and we’re sharing. They have insights and access that we don’t, and vice versa, and if we don’t share, then we have to expend resources to try.”

Common technology is key to data and intelligence sharing, whether it’s happening with foreign partners or the other 16 agencies in the U.S. intelligence community, he said. The cloud helps with that, he added; the IC currently has access to both commercial and private clouds, each used for a different security level of information.

But although cloud technology has been important in improving workflow and interoperability, it hasn’t been the cost saver that was predicted, Gumtow said.

Sometimes cloud is not a technically feasible solution, especially in remote locations without much physical infrastructure, he said. And it doesn’t always boost mission functionality: “Just because you put it in there and it had increased performance on the back end, did it really do anything for your mission?”

The business cost analysis is the final variable in the cloud equation; figuring out the actual cost over time is a complex task, he said, adding, “You have to look at it more holistically.”

Recently, technology has become a concern for the IC in a new way. The average citizen’s increasing ability and willingness to use social media in potentially controversial ways — including deepfakes — is worrisome, Gumtow said, and professional operators are even better at it.

“Everybody wants to share everything about themselves and their families, and they’re putting their pictures and everything out there — if somebody wants to take all that and create a persona of you, it’s really easy to do,” he said. “It’s scary.”

MORE FROM FEDTECH: Learn how security became a selling point for cloud in government.

In addition, the skill level needed to crack protected data is getting lower by the day, he said: “I know people who are learning that kind of tradecraft from YouTube videos.”

And this makes it more critical for the IC to rapidly adjust to new threats via new technology and new methods of collaboration and interoperability, he said, especially as foreign adversaries — whom he did not name — use the internet to steal U.S. intellectual property.

“It allows them, being further behind, to leapfrog forward, and how do we adjust?” he asked. “Not only from a defensive mechanism, but from an industrial-military base — how do you build weapons to defeat something that was stolen from you in the first place?” 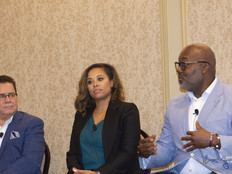