In 2009, researchers fighting the H1N1 swine flu pandemic were kept up to date via a chain of information transmitted from individual secure desktops. This procedure required each scientist to read thousands of physical pages of information — some of which they’d already seen — to remain current on drug trials and data from healthcare providers and hospitals.

When the virus began to re-emerge in 2017, officials at the Food and Drug Administration knew they needed a better way to track data dealing with the outbreak, and deployed blockchain technology as an assist.

“We designed an application that enabled us to acquire automatically encrypted data, in real time, from many sources, and have an absolute record for all the participants,” says Dr. Henry Francis, associate director for data mining and informatics evaluation and research at the FDA’s Center for Drug Evaluation and Research.

His team’s Real-time Application for Portable Interactive Devices (RAPID) program is one of the first full-blown implementations of blockchain in federal government, but interest in the technology is growing. Pilots are springing up in a variety of agencies looking for secure, transparent ways to move data from distributed sources quickly. 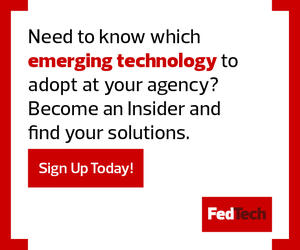 Can Blockchain Offer a Management Advantage?

The Department of Treasury’s Office of Financial Innovation and Transformation (FIT) made an initial foray into blockchain in 2017, with a small proof-of-concept project that tracked mobile devices.

The agency followed with another proof of concept that used the technology to manage software licenses, and conducted a third project in conjunction with the National Science Foundation to test whether the use of blockchain could improve grant payment processes.

Early blockchain trials showed promise but indicated that FIT needed to learn more about the technology to manage it more effectively and match it with best-use cases, says Craig Fischer, the FIT project director.

In addition to transparency and efficiency, blockchain — with no single point of failure — offers resiliency, Fischer says. But it’s a new paradigm, and it raises questions that go beyond the technology.

“There are key policy and management issues we need to address, and we need to figure out how we govern a distributed network,” he says. “We want to explore the value proposition more fully — does blockchain offer a real advantage over what we do today?”

Using blockchain enabled the agency to award a contract that is expected to cost $30 million less than it would have without that method of analysis, HHS CIO Jose Arrieta said in February. (Arrieta resigned in August.)

The General Services Administration is working to discover how blockchain would best contribute to the agency’s current environment, according to a GSA statement. The agency has specifically eyed blockchain for its Multiple Award Schedule business processes, which are already being optimized using robotic process automation.

The FDA is also investigating how it can use blockchain to track and manage threats to food safety across the nation’s vast and decentralized food system, and to increase transparency in the pharmaceutical supply chain. And the USDA has already certified BeefChain, a blockchain company that traces the beef supply chain.

MORE FROM FEDTECH: What do you need to know about blockchain security in a federal setting?

Blockchain Can Strengthen Trust Among Enterprises

Blockchain, a form of distributed ledger technology, has captured the attention of federal agencies because it establishes trust among disparate entities that need to share information, and it makes an immutable record that prevents data tampering, says Dan Tucker, vice president of cloud and data platforms for Booz Allen Hamilton and a member of the Data Foundation Board, a nonprofit think tank.

“Blockchain has potential in any situation where you’re building a data ecosystem around many independent data repositories,” Tucker says. “Supply chain management is emerging as a popular use case, but there are trials of many sorts going on around the federal government where agencies are trying to improve data sharing.”

As more federal agencies explore blockchain for their missions and environments, they will face some cultural and technical barriers, he says. Technology standards are only now materializing; developers build mainly on the Ethereum and Hyperledger platforms, and interoperability issues between platforms and other technologies are still being resolved, he says.

The developer community is relatively small compared with other data management technologies, putting necessary skills and expertise at a premium. And the consensus model, which is often at the heart of a blockchain implementation, can introduce another layer of complexity, he says.

“There’s often some friction in bringing new entities onto the blockchain platform,” Tucker says. “You are now a contributor to a decentralized ecosystem of data sharing, so there are more hoops to jump through.

“You have to decide what you need to do from a security perspective — you will likely need to get CISOs from multiple agencies on board. What software do you need to integrate with the blockchain platform? Being able to stand up the solution is not always a simple process.”

Francis says his team at the FDA is looking at five or six use cases that might be enhanced by blockchain, but cautions the technology has to be viewed as a tool rather than a strategy.

“I think you have to consider blockchain for anything that has to be quantified and shared, but you need to think about both ends of the process,” Francis says. “You need to focus the information you feed into blockchain so that it can be easily digested, and you have to be clear on how you use the data on the other side. Blockchain is always a piece of a larger picture.”