Government agencies must keep running during times of disaster or other emergencies, even when workers can’t get to or enter their offices.

Sending employees to work from home — including those tasked with funding, procurement, maintaining public safety and even providing virtual ­care — keeps them safe while still ­supporting critical operational continuity.

The Jabra Evolve 65 UC Stereo ­headset can help with the transition.

Designed for ease of use and ­integration into many top collaboration platforms (among them, Cisco Jabber, Microsoft Teams and Skype), the device transforms almost any environment into a suitable place to ­conduct business.

It can even ­connect with two devices at once, such as a ­laptop via a USB ­dongle (included with the headset) and a ­smartphone using Bluetooth.

DISCOVER: Find the right work from home technology solutions for your agency.

Phone calls made via the Jabra headset ­during recent tests came through loud and clear thanks to wideband speakers optimized for voice communications. The microphone sits on a boom in front of the user’s mouth and perfectly ­captured all conversations, according to listeners on the other end of calls.

And because situational background noises are common in a work-from-home world, the microphone’s ­noise-canceling technology helps ensure that the focus stays on the ­conversation at hand.

Users needn’t be ­tethered to a fixed workspace, however. A Bluetooth ­connection allows headset wearers to move up to 100 feet from a paired computer or smartphone (or both devices, if using the dual connectivity feature). Promote Efficient Conversation Long days at work don’t pose a problem either. Even with nearly constant use, talk time lasts up to 14 hours. The device can be charged with a USB cable or hung on an optional charging stand. A fully drained headset can recharge in about two hours.

Keeping federal agency staff safe and working during times of disruption or other emergencies is important, and the Jabra Evolve 65 UC Stereo headset can support that effort — both now and in the future as flexible remote ­workflows become the new normal. The Jabra Evolve 65 UC Stereo ­headset delivers high-quality audio and easy connectivity — a benefit for remote teams. 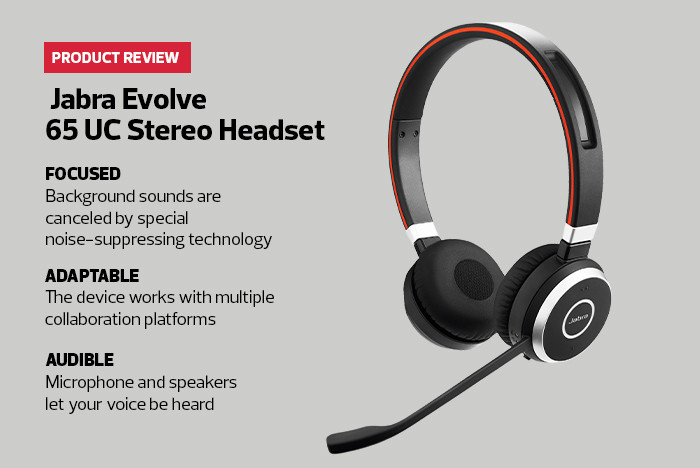 How to Connect the Jabra Headset with Collaboration Platforms

Faced with a larger-than-normal remote workforce, some federal agencies might be fine-tuning their experience with communication platforms. The Jabra Evolve 65 UC Stereo headset is designed to work with most of them, and I put that to the test.

It shouldn’t matter when using the Jabra Evolve 65 UC Stereo headset, which is certified to sync easily with most major platforms. Even if using a lesser-known system, Jabra maintains that the headset will at least provide audio functionality.

Although the headset couldn’t fix bad connections brought on by heavier-than-normal usage with some of those platforms, it did maximize them so the call quality was as good as possible given the circumstances.

Still, the calls were typically flawless, and I never had to drop any of the more than 200 test calls made over a two-week period due to major issues. Most of the time, it was impossible to tell that a shared, cloud-based infrastructure was hosting the calls. They sounded more like dedicated landlines in terms of quality, and much of that is due to the Jabra Evolve 65 UC Stereo and its broad compatibility. 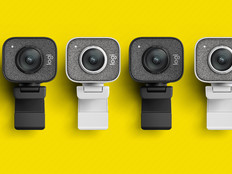