When cloud computing first came on the IT scene, it held the promise of hundreds of organizations — government and corporate — sharing online computing resources and enjoying economies of scale. And several agencies did move systems, such as e-mail, to public-cloud infrastructures.

But it became apparent almost immediately that most federal agencies, under most IT circumstances, wouldn’t participate in cloud computing the way it was first envisioned. There were concerns about security, data privacy and, in some cases, the physical location of public-cloud infrastructures. So the private cloud was created, characterized by the same shared services, elasticity and rapid provisioning as other cloud services, but dedicated to government IT. Today, as agencies move systems to meet the federal “cloud first” mandate, most employ a private-cloud model.

“Over 80 percent of what the federal government does in the cloud will be done in the private cloud,” says Shawn McCarthy, research director at IDC Government Insights. “As the public cloud matures and proves itself to be highly reliable, that might change. But a level of trust hasn’t been established yet.” 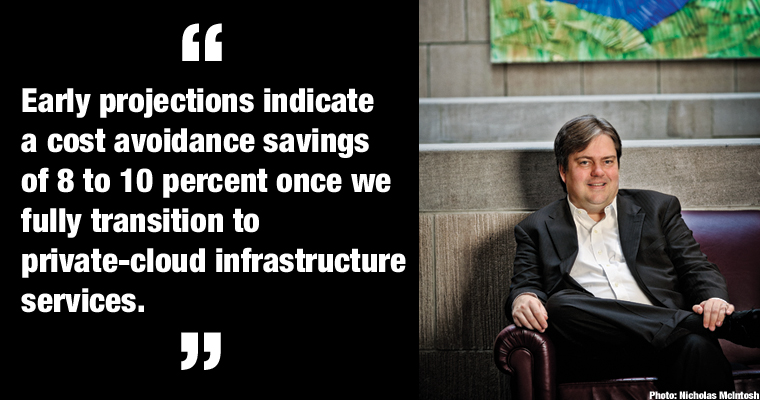 In government, private clouds fall into three general categories. First is a private cloud that one agency obtains as a service from another government agency. “We think of that as a shared service, which has been used in government for a while,” McCarthy explains.

The Census Bureau is in the process of building a private cloud at its Bowie, Md., data center. When the project is up and running, it will offer infrastructure as a service (IaaS) to Census users.

“This is based on user feedback,” says Harry Lee, senior computer scientist for infrastructure at Census. “They come to IT for processing capabilities, storage and applications. It takes time to provision those, so we wanted to improve the way we deliver those capabilities and, over time, let users request those services through a web portal.”

Census is following a building-block approach to creating its private cloud, from standardizing its infrastructure across the agency, to consolidating systems in Bowie, to virtualizing the infrastructure on IBM BladeCenter servers running VMware. From there, Lee says, it’s a matter of adding automated tools for provisioning the infrastructure based on users’ needs, introducing capacity- and demand-management software and, finally, developing a web interface for requesting IaaS.

While the result will be a private cloud that offers IaaS, Lee says Census will eventually pull in public-cloud resources to create a framework for providing other shared services.“Based on security and privacy requirements, there are certain things we need to retain in a private cloud,” he says. “But based on spikes in demand, especially when we get to the 2020 Census, we need to think about where we can look externally to provide those peak resources. We don’t want to buy for the peak, so we have to consider a hybrid cloud.”

The Homeland Security Department has developed and fielded 12 cloud-based services — nine in private clouds hosted at two DHS datacenters. One of the data centers is government-owned, and the other is contractor-owned.

“Ours is a two-part strategy that features both the private-cloud and public-cloud models,” explains DHS CIO Richard Spires. “While our public cloud enables migration to open-source technology that improves government-to-citizen services, our private-cloud infrastructure is operated solely for our organization.”

According to Spires, DHS uses private clouds to manage sensitive data and services, such as virtual desktops and mobility services; virtualized, multitenant collaboration environments for information sharing; and authentication services across the department. “We’re also transitioning our legacy e-mail systems to e-mail as a service and cultivating customer relationship management services,” he says.

Some agencies considering the cloud worry that having a dedicated infrastructure to host private-cloud services can eat away at potential savings. However, while a private cloud may not be as cost-effective as a public cloud, it can still save agencies money.

In the long run, many regard private clouds as one stop along the way to secure, public-cloud services. At the Consumer Financial Protection Bureau (CFPB), which began operation in 2011, CIO Chris Willey oversees an IT infrastructure built from scratch. “We’re not building a data center,” he says. “We’re not buying racks or servers, except in a couple of rare instances. From the beginning, we realized that to do what we wanted to do as fast as we wanted to do it, the best way was to leverage cloud infrastructures.”

The CFPB intends to run its entire infrastructure in one type of cloud or another. The agency gets some of its resourcesfrom the Treasury Department, some from a private-cloud provider dedicated to government customers, and some from a traditional public cloud. As service providers address security concerns in public clouds, Willey expects to transition more of CFPB’s resources to those clouds — and he believes other agencies will go the same route. “We have to make sure that we do due diligence on the security side so that as we bring more sensitive data into that environment, we do it in such a way that it doesn’t jeopardize the data that we have to protect,” Willey says.

Agencies with private clouds often look to maximize their existing investments, having already built data centers and invested in server technology. “There are significant switching costs for people who’ve built that kind of infrastructure and after standing up a system in a data center, say, ‘All right, now we’re going to move this into a cloud,’ ” Willey explains. “And clearly, agencies with private clouds worry about security and protection. They’re right to be cautious about that.

“But because we’re basically starting from zero, we have the opportunity to take advantage of public clouds sooner than other agencies,” he says, adding that he expects more agencies to adopt public clouds, but on varying schedules that suit their needs.

Though the vast majority of its cloud services are delivered via private clouds, DHS’s Spires can envision a time when his department utilizes more public-cloud resources, especially as the Federal Risk and Authorization Management Program (FedRAMP), a program for assessing cloud services, evolves.

Don't Get Hung Up on Dollars and Sense

Cloud computing promises many benefits, not the least of which is cost savings, through resource consolidation and streamlined provisioning. But when it comes to private clouds, where services could be housed either on government or contractor infrastructures, cost savings may not be the most important issue.

A 2012 study by the Intelligence and National Security Alliance’s Cloud Computing Task Force made the case that the benefits of cloud computing had more to do with changes in business models than IT infrastructure. The study, “Cloud Computing: Risks, Benefits, and Mission Enhancement for the Intelligence Community,” which drew upon interviews with executives in government and industry, found that many organizations saw no cost savings by transitioning to cloud computing.

According to the study, “It was suggested by one federal CTO that cloud implementations may cost more in the short run (especially for private cloud models), but will provide significant mission value.”

Depending on how an agency approaches its cloud — and the services it deploys, such as e-mail — it can enjoy some measure of savings. But the biggest issue is aligning its operations to support the new computing model. “Cloud computing requires changes in the workforce, because the cloud model transforms the traditional roles of IT specialists,” says Richard Spires, CIO of the Homeland Security Department.“ It requires a culture shift to support an environment under significant change.”