Cloud computing is currently one of the premier topics of discussion within the federal technology community. In our recent interview with federal CIO Steven VanRoekel, he spoke of his plans to apply the FedRAMP model to other areas of the government, including mobile IT. As cloud technology has spread, IT departments and other decision makers in the government have had the opportunity to pilot cloud initiatives and begin the move to the cloud in earnest. Because agencies are taking different approaches to the cloud, CDW•G surveyed more than 1,200 IT professionals across government, education and business to create the 2013 State of the Cloud Report. Below are several key points from the analysis:

Consumer Technology Is Driving IT

Like it or not, technology geared for consumer use is having a major impact on IT decisions. Due to the influx of mobile devices, apps and free cloud services such as Dropbox, Gmail and Wordpress, consumers and federal employees have come to expect the convenience of using technology when and where they want to use it. When it comes to cloud storage, for example, users understand that it can be very simple. Accessing servers and signing into virtual private networks is clunky, while dragging and dropping files into a Dropbox or Box.net folder is simple. Users recognize the ease, and IT departments are responding with bring-your-own-device (BYOD) programs and secure cloud services. The goal has always been to make technology easier for employees to use, and now that’s happening faster than ever.

Who Decides to Move to the Cloud? 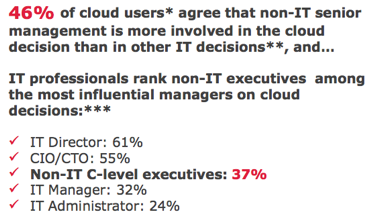 Cloud computing is increasingly a business decisions, not an IT decision. Decision makers in government who aren’t part of the IT department are pushing to move to the cloud. Those decision makers are part of the consumer base that has adopted cloud computing for personal use, and they understand how it can affect productivity. In the federal government, agencies are also complying with the administration’s Cloud First policy to “maximize capacity utilization, improve IT flexibility and responsiveness, and minimize cost.” This is significant because IT no longer operates in a vacuum. End users are increasingly interested in and appreciative of the technology delivered by IT departments. Involving actively engaged users in the decision-making process is a positive thing, but doing so makes it harder to meet their demands. 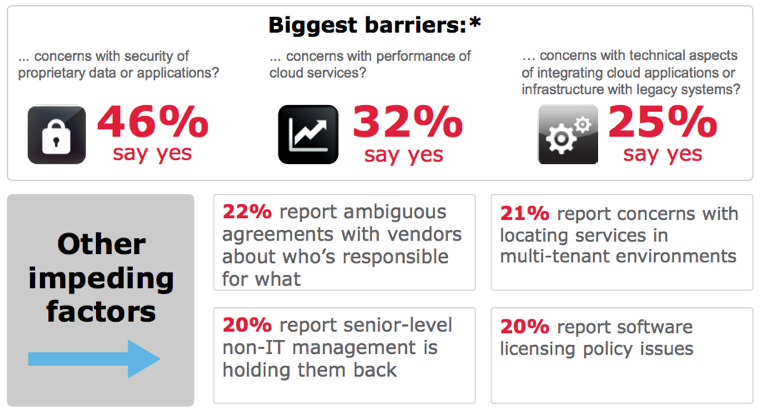 Security is still a concern, but agencies are faced with a number of other issues as applications and storage are moved to the cloud. Because many agencies run legacy technologies, it is not always cost effective to move operations into the cloud. If those applications and services are hosted locally, IT loses control of performance. This issue stands in the way of nearly every service that agencies consider moving, and it has slowed the move to the cloud. By preparing as many services to move as they can, agencies will future-proof much of their technology.