“Big Data” is not only the most overused term of the year; it might be the most incorrectly used as well. The term, which Gartner defines as "high-volume, high-velocity and high-variety information assets that demand cost-effective, innovative forms of information processing for enhanced insight and decision making," is viewed by federal leaders as an avenue for cost cutting. While that definition may be accurate, it's also thrown around carelessly by non-IT executives eager to jump on the technology bandwagon.

The easiest way to measure the popularity of a term like Big Data is to look at Google Trends, which measures how frequently keywords are searched for. Searches for “Big Data” gained steam in 2012 but took off in 2013 (Google doesn’t provide absolute numbers, just relative data). 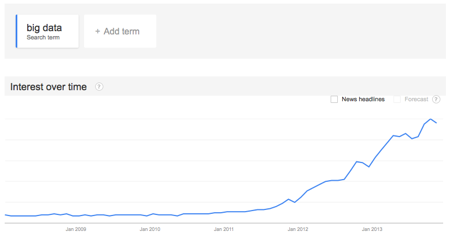 Quartz took a look at conference-call transcripts to weed out mentions of the term:

A search of transcripts of for more than 5,000 companies contained in FactSet’s database reveals that “Big Data” has been mentioned during 841 conference calls and investor presentations this year. That’s up 43% from the 589 calls and presentations it featured in last year, and a much bigger increase than any of the other corporate buzzwords Quartz searched for. “The cloud” featured on 1,356 calls and presentations, but that was up less than 2% from last year; the more cumbersome term ”cloud computing” is clearly out of fashion, having fallen 37%. “Mobile” and “mobility” each returned more than 5,000 entries, but appeared less than they did in 2012.

Quartz also points out the term’s misuse: “The term ‘big data’ is often misused to mean the kind of data analysis that could be done on a single desktop computer, when it should really be reserved for applications requiring serious processing power.” It’s important for CIOs, especially at federal agencies, to educate their peers and stakeholders about what, exactly, Big Data is.

At this year’s Executive Leadership Conference, our managing editor Matt McLaughlin asked CIOs to define Big Data. NOAA’s Joe Klimavicz’s response was the most telling: “When your data becomes larger than your traditional tools can process, that’s Big Data. You can’t just go down to Best Buy to get tools that can handle this data.”

What do you think will be the most hyped term of 2014?