The Army Research Lab is working to create synthetic bones, as well as parts for military vehicles, using 3D printers.

In his 2013 State of the Union address, President Obama singled out 3D printing for mention, stating that the technology has "the potential to revolutionize the way we make almost everything." For many agencies, that potential became reality years ago.

For example, the Army Research Laboratory (ARL) has used 3D printing for about six years. Its current research includes developing ways to use the technology to create medical devices and parts for damaged military ground and air vehicles. ARL also is working with the Edgewood Chemical Biological Center to create 3D-printed synthetic bones that work like real ones.

For defense applications, part of 3D printing's appeal is its ability to reduce the amount of spare parts that must be transported to the field.

"For an assembled part, every screw, every nut, every bolt has to be maintained and resupplied in the case of failure," says Jaret Riddick, team lead within the ARL Vehicle Technology Directorate. "Having the capability to build complex parts as unitary structures — with fewer parts — would dramatically decrease maintenance and logistics costs."

Civilian applications of the technology are achieving significant results too. For example, one federal researcher needed 50 plates for drug screening. A supplier said it would sell the drug-screening plates only if the agency bought at least 100,000, at a cost of roughly $1 million, says Darrell Hurt of the National Institute of Allergy and Infectious Diseases. "The person only needed about 50 of the plates. Those 50 plates can be 3D printed for about $1,000 to $2,000."

Predicted size of the 3D printing market by 2015

Walter Reed National Military Medical Center's 3D Medical Applications Center (MAC) developed processes for printing surgical instruments in the field. This process minimizes the amount of medical gear that has to be stored aboard submarines or transported to the front — with a caveat.

"The type of machine we're looking at, it usually takes four to six hours to print," says Navy Capt. Gerald Grant, 3D MAC's service chief. "So you have to have lead time."

Organizations that use 3D printing often say they expected to deploy it for a few specific projects. But once they used it, they realized many other possibilities. Expanding its use can often mean having to replace nearly new equipment with more sophisticated models.

Grant says first-timers often ask him for advice about which printer to buy.

"That's really the wrong question," he says. "It should be, 'What do you want to make?' That's going to tell you what kind of materials you might want and what characteristics those materials need to have. That leads you into what type of machine."

Computer-aided design (CAD) files are commonly used to tell a 3D printer what to make. But why would a manufacturer provide those to customers, enabling them to make those products on their own? And what's to stop customers from using CAD to reverse-engineer parts?

The American Society of Mechanical Engineers is wrestling with the issue of CAD copyrights.

"If you're going to ask somebody to develop something, I don't know why you can't have the intellectual property," says Navy Capt. Gerald Grant. 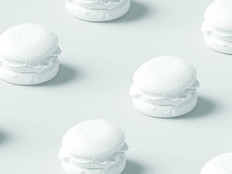