The Defense Advanced Research Projects Agency (DARPA) is moving forward with plans to develop a lightweight exoskeleton suit that could have far-reaching effects beyond the battlefield.

DARPA's Warrior Web program is extending an ongoing partnership with Harvard University faculty to demonstrate a proof of concept for a “radically new approach to wearable robot design and fabrication,” the institute announced last month.

A team of faculty members at Harvard’s Wyss Institute will receive up to $2.9 million from the DARPA program, based on their ability to meet a series of technical milestones, according to the institute. (View a complete list of team members and collaborators here)

“The Warrior Web program’s ultimate goal is a lightweight, conformal under-suit that is functionally transparent to the user — similar to a diver’s wetsuit,” according to the Defense Department’s Armed with Science blog.

“The current Wyss Institute suit is made of soft, functional textiles woven into a piece of smart clothing that is pulled on like a pair of pants and intended to be worn under a soldier’s regular gear” and help protect parts of the body that are prone to injury, the blog noted.

“The potential is really just enormous,” Walsh said in a video interview. Check out the video below to learn more about the capabilities of this wearable tech suit. 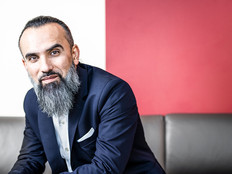