The data business is booming, and so are the demands of government and industry to hire professionals who can make sense of their data.

The city of San Francisco established the role of chief data officer last year and created a data coordinator position for each department. Other states and cities — and the federal government — have followed suit. The White House hired its first chief data officer in February to help lead the administration’s open-data efforts and recruit talented data experts into government.

Roughly 1.6 million government employees are employed in data occupations, according to a new report by the Commerce Department’s Economics and Statistics Administration. Those jobs account for about 16 percent of the 10.3 million public and private sector jobs in which data is central to the work being performed. The report is based on 2013 figures, the most current full year’s worth of data.

There are far more than 10.3 million jobs in the U.S. where data is at least important to the job, but the report focuses on data-intensive jobs, or those in which data is central to the work being performed. Employees in those roles — including Big Data engineers, database managers and data analysts — process or analyze data using sophisticated computer technology.

Similar to the private sector, most government employees in data-intensive jobs are in business and computer roles, followed by management and office and administrative roles. 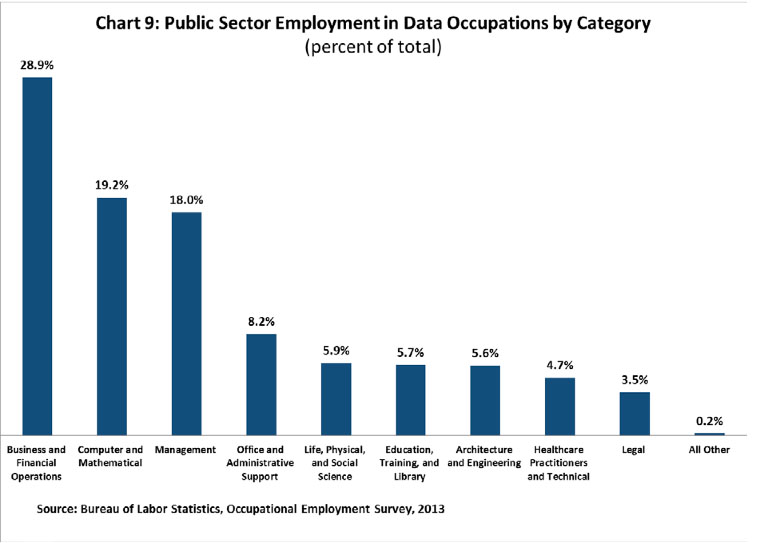 The report provides additional background information on the management and office support positions in government:

Employment in data occupations in the areas of management (primarily education administration) and in office support (largely police and fire dispatchers) make up a larger portion of the total in the government sector than they do in the private sector; these two areas account for more than a quarter of the government sector employment in data occupations, as compared with 10 percent in the private sector.

Virginia, Maryland and Washington, D.C., boast some of the highest concentrations of data-intensive jobs in the private sector, but the report suggests that the federal government may be the driving source of those jobs.

According to the report, “jobs that support the federal government may be playing a role in this specialization in data industries.”