Until a few weeks ago, the general public was not privy to data showing how many people visit government websites, which websites they visit and whether they’re using a desktop or smartphone, or an Android or Windows operating system.

If you’re wondering, there were 1.4 billion visits to government websites within the past 90 days, and most people were looking for information on taxes, weather and federal jobs. More often than not, they used a desktop computer running Windows 7, but some visitors navigated federal websites from their smartphones and tablet computers.

“One of the reactions from people is they just didn’t know the amount of traffic that was coming to government websites,” says Gwynne Kostin, director of the digital government division within the General Services Administration. “People think there is a perception that government is far behind or not providing services.”

At any given moment, tens of thousands of people are perusing government websites, and that number is prominently displayed at the top of the analytics.usa.gov website. (At the time this story was written, there were 126,754 people on government websites.) 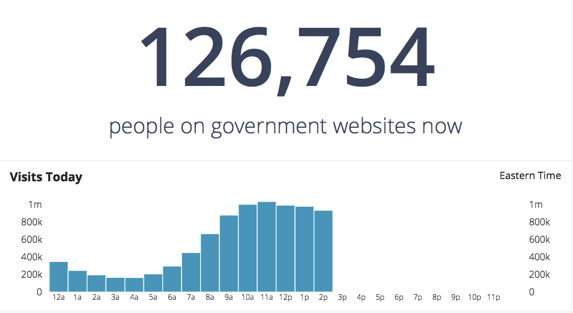 “Just that big number at that time really does show a level of impact about what is happening on government [websites],” says Kostin, one of the pioneers of the Digital Analytics Program within the GSA.

The program began in October 2012 as a pilot within the agency’s Office of Citizen Services and Innovative Technologies and has since evolved into the analytics dashboard that citizens can view. The data “comes from a unified Google Analytics profile that is managed by the Digital Analytics Program,” according to one of the federal entities that had a hand in building the site.

Development of the new analytics website was a collaborative effort among several entities: the GSA’s internal digital services team, 18F; the Digital Analytics Program; the U.S. Digital Service; and the White House.

“It’s a tool for transparency, and it allows the public to get an inside view of how the government works and see what sites people are using,” Kostin says. She expects all agencies will join the program, after they work through the onboarding process and align it with their agencies’ internal timelines.

Analytics data for healthcare.gov, one of the government’s more high-profile websites, is not yet publicly available, but Kostin says that information will eventually be included on the new site.

A recent GovFresh article notes that "despite a digital strategy issued by the White House two years ago calling for more mobile-friendly citizen services, the top four most-visited federal government websites over the past 30 days fail this test.”

Those sites are irs.gov, weather.gov, usajobs.gov and nps.gov.

In response to questions about the lack of mobile optimization for the sites and how the analytics data would help to usher in changes, Kostin says many organizations are working to introduce mobile-friendly websites and some of those updates will be rolled out in the coming weeks. Making analytics data public empowers citizens to ask tough questions and encourages agencies to make changes, Kostin adds. “There is always a question about how to apply resources.”

Short term, the analytics program wants to introduce geographic data to the site to show where people are accessing government sites. The site will not collect personally identifiable information, and data will be anonymized, Kostin explains.

According to 18F, which was part of the development team, “individual visitors are not tracked across websites, and visitor IP addresses are anonymized before they are ever stored in Google Analytics. The Digital Analytics Program has a privacy FAQ.”

You can make suggestions and contribute to the project by visiting GitHub or emailing digitalgov@gsa.gov.