The theory behind quantum computing dates back more than 20 years, but recent innovations from companies such as IBM have some believing that the technology is close to becoming a reality. 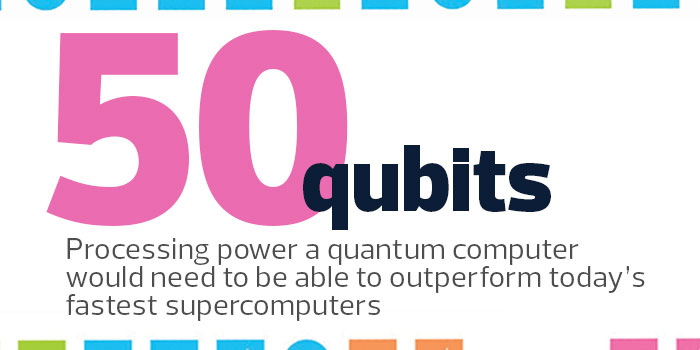 The challenge, though, comes in scale. The more qubits a machine uses, the more likely a breakdown will occur.

In 1994, mathematician Peter Shor created Shor’s Algorithm, which serves as the backbone of quantum computing.

David Moehring, program manager for the Multi-Qubit Coherent Operations program at the Intelligence Advanced Research Projects Activity, says later proof of the algorithm led to the government’s investment in the technology, especially in intelligence.

The intelligence community wants to use quantum computers to crack complex codes that traditional computers lack the power to do. Quantum computing, in theory, could power advances in cybersecurity, coding and Big Data analytics.

“It’s incredibly difficult research,” Moehring says. “Creating a universal quantum computer that can do something a classical computer cannot is a hard problem to solve.”

Moehring believes it’s possible, but it will take time — possibly several more decades. “And there’s a lot of uncertainty about what a quantum computer will do,” he adds.

In May, IBM introduced a cloud-based, 5-qubit quantum processor for widespread consumer use.

“We call the graphical interface a quantum composer,” says Jerry Chow, IBM’s manager of experimental quantum computing at the Thomas J. Watson Computing Center outside New York City. “It’s a bit like playing music. You’re putting in different operations at different times, like playing musical notes, to help you write your own algorithms or programs.”

Chow says IBM found a new class of quantum computer, one with between 50 and 100 qubits, during research.

The National Institute of Standards and Technology (NIST) believes in the power of quantum computing, especially for cybersecurity. The agency released a report this April stating that quantum computers could break many of the password systems in place, threatening the confidentiality of all information online.

As such, NIST wants to develop algorithms now that quantum computers will not be able to break. NIST says the research will require a significant financial investment, along with public trust to use the technology responsibly.