This summer, the D.C. area’s Metro public transit system began a yearlong repair effort that has closed down stretches of rail lines for weeks at a time, creating disruptions that have forced federal workers to find other ways to get to work, including driving, carpooling or taking buses.

Fortunately, for a growing number of federal employees, telework is an option that helps them deal with difficult commuting conditions, allowing them to work from home for at least some of the time.

“It’s very frustrating and stressful if you lose one way to get to work, so being able to telework is a blessing,” says Brenda Horne, human resources transformation project management officer and the telework executive at the U.S. Agency for International Development (USAID). “Our folks can still work, and they can work stress-free without worrying about the commute.”

The number of federal teleworkers has risen steadily since enactment of the Telework Enhancement Act of 2010, which requires agencies to establish telework policies, expand the number of eligible employees and include telework in continuity of operations plans.

Telework got another boost in 2014 when President Obama issued a memorandum that called for agencies to expand opportunities for work schedule flexibility, including telework. The memo also encouraged agencies to build a supportive culture around telework.

Now, when bad snowstorms hit and the government buildings shut down, users who are telework-ready are expected to telecommute or take a vacation day. And when major events that can snarl traffic occur, such as the U.S.-Africa Leaders Summit in 2014 or the pope’s visit in 2015, the Office of Personnel Management urges agencies to allow employees to telework.

“During those events, 75 percent of our eligible workers teleworked from home. We did not lose productivity,” Horne says.

Besides continuity of operations, agencies say the main benefits of t­elework are improved recruitment and retention of workers, increased productivity, better work-life balance and fewer absences, according to a 2016 Government Accountability Office report.

Chuck Wilsker, president and CEO of the Telework Coalition, says telework adoption is being driven by government policies, advances in ­technology for mobile workers and a younger generation of tech-savvy users who want to work remotely.

The State Department has about 10,000 domestic employees who are eligible to telework. Of those, nearly 1,700 telework on a regular schedule — generally, once or twice a week — while 4,619 others work remotely depending on the situation.

To support telework, the State Department in 2011 deployed Citrix XenApp and XenDesktop virtualization software to enable users to remotely access their applications and desktops from their home computers, including access to Microsoft Office, SharePoint and web applications.

“We provide a full desktop, just like they see it at work,” says Mark Davis, deputy division chief for the mobile and remote access division of the State Department’s Bureau of Information Resource Management.

To communicate, they use Microsoft Lync to send instant messages, and will be upgrading to Skype for Business in the near future. The agency also uses Adobe Connect, which allows users to meet virtually through video conferencing, Davis says.

Similarly, at USAID, teleworkers log in to a Citrix virtual desktop and can communicate and collaborate with their colleagues through several cloud-based tools.

Most USAID teleworkers use their own computers to work from home, but if they are assigned notebook ­computers, they can take them home to work, she says.

Meanwhile, the General Services Administration deploys a one-computer model, meaning agency users are issued a notebook computer for both the office and teleworking.

“GSA employees are able to access their work through a variety of methods, including VPN, virtual desktop or web browser using their two-factor authentication,” says Teresa Curtis, a supervisory IT specialist with the agency.

GSA has made huge strides with its ­teleworking program, which began in the 1990s. In 2015, 93 percent of agency employees were eligible for telework, and 95 percent of those workers teleworked during the year.

Telework enables GSA users to ­continue working and remain productive during emergencies or situations that require building closure. It has also saved the agency money by reducing office space. For example, the agency has reduced its headquarter space by 40 percent, yielding $24.6 million in annual savings on rent — and part of the savings stems from teleworking, the agency says. 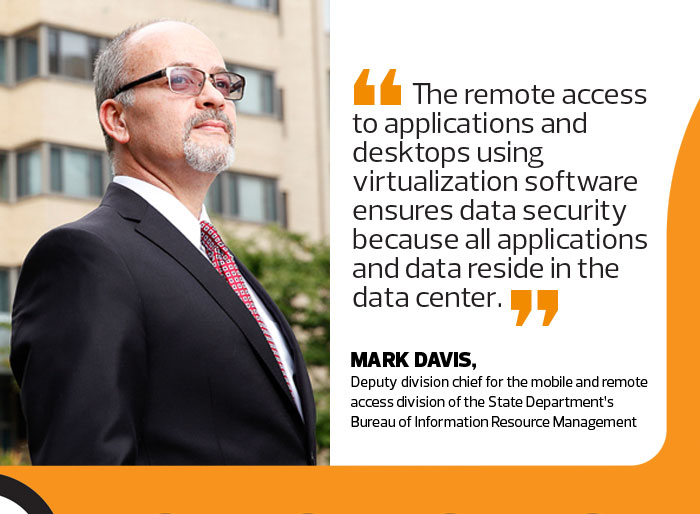 Telework also reduces stress on the environment by eliminating the carbon emissions of thousands of teleworkers who no longer commute, the agency says.

“We’re interested in wellness and having employees find the time to take care of themselves and their families,” says Ikels. “With workforce flexibility, including telework, employees can carve out for themselves pockets of time to do personal activities, whether it’s exercise, being with their families or pursuing hobbies, because any day you don’t have to commute, you save two hours for yourself.”

Besides work-life balance and business continuity, another significant benefit is the ability to retain employees, Horne adds. Some employees may have spouses who are stationed overseas in the foreign service or the military. To keep valued and talented employees, the agency allows them to move with their spouses and work remotely full time, she says.

“They have skills we need, and the work they are assigned is portable,” she says. “And with internet connectivity, they can work remotely.”

The Office of Personnel Management has ­produced a telework guide and online training videos for managers and employees. But agencies set their own policies and continuously make improvements to increase telework participation and ensure success.

The State Department, for example, plans to create its own training program for supervisors that’s tailored specifically to meet the department’s needs.

“We want to guard against the perception that all the responsibility for managing telework is on the side of the teleworker,” says Judy Ikels, chief of the Work-Life Division at the State Department. “Teleworkers have considerable responsibilities for building a virtual presence, making sure they call in for meetings and being available just as they would be in the office. But supervisors also have to think about things differently. And we try to remember to pick up the telephone, one of the most important and underused tools.”

The U.S. Agency for International Development recently updated its telework policy, including information on accommodating employees who may have medical, family or other personal situations that require teleworking.

Overall, managers are embracing the responsibilities of telework as well as the employee benefits it provides.

“Three years ago, there was more resistance to telework,” Ikels says. “They needed to see the advantages of it. They’re more comfortable now with how to manage teleworkers. And I do think over the past three years, it’s gotten the due respect it needed.” 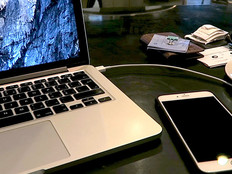 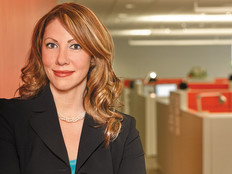