Dell’s desktop PCs have been a staple of the federal workspace for 20 years. In the 1990s, the company decided to release major updates to its OptiPlex line on an occasional basis, allowing agencies to standardize and secure a reliable system that could then last for years. As such, new OptiPlex models are somewhat rare. It’s been two years since the last revamp.

Dell clearly designed the new OptiPlex 7050 series to capitalize on its past successes. Even though the desktop has a compact form factor — measuring 11.5 inches tall in its mini-tower configuration — it’s packed with one of the fastest Intel quad-core processors: an i7 running at 3.6 gigahertz. That horsepower comes backed by 8 gigabytes of top-of-the-line DDR4 RAM.

The OptiPlex also boasts the latest USB 3.0 Type-C port to run auxiliary devices at internal component speeds. It features an SD memory card reader for legacy applications, and the desktop PC supports up to three displays without the need for an additional graphics card.

Beyond its specs out of the box, the new OptiPlex leaves plenty of expansion options for agencies. For example, while 8GB of RAM comes standard, Dell provides enough slots to expand to 64GB. In terms of storage, the system I tested arrived with a spectacularly fast one-terabyte PCIe NVMe hard drive.

With the OptiPlex 7050’s top-of-the-line components and nearly unlimited expansion options, agency administrators can easily extend the life of their systems. This means adding more capacity to handle increasingly complex programs and applications. Better yet, this can be done without issuing specs for a new system or bidding a new contract. 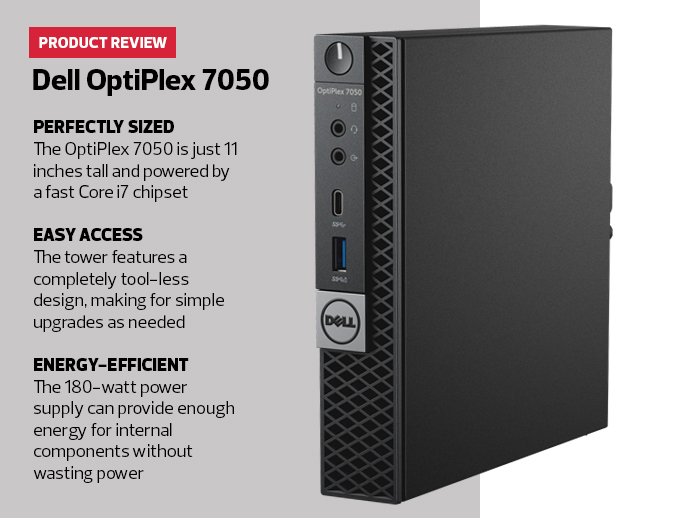 Dell seems to have created the physical design of the 7050 with the federal workplace in mind. For example, the rear of the system is enclosed in a lockable cage. This makes it difficult to accidentally restrict airflow to the compact system and protects the ports and cables in the rear of the desktop from physical tampering and abuse.

With its powerful performance and limitless expansion options, the new OptiPlex 7050 is ready to serve federal agencies today, and well into the future.

One of the most attractive features of the OptiPlex 7050 — beyond its blazingly fast out-of-the-box specs — is the ability to expand the base system. Given the tiny form factor, that’s not the easiest accomplishment. Yet somehow, this desktop allows for tool-less upgrades, a difficult feat given how little space is available within the 11-pound mini-tower.

Dell has long been at the forefront of tool-less access technology, though its efforts have not always been successful. Early attempts at tool-less entry designs included the infamous clamshell configuration in the Precision and XPS line. Then, users had to crack open the entire computer to access internal components, an unwieldy process.

But Dell eliminated those problems in the new OptiPlex 7050, which features an easy-to-remove side panel. Though administrators can lock the tower to prevent unauthorized access, once inside, they have access to every upgradeable component because the 7050’s cables and wires are neatly positioned out of the way.

Sliding the hard drive out of the system, or adding another into the free drive bay, was almost effortless. Removing system RAM or adding new memory was likewise completed in less than a minute, including the time it took to position the system on a worktable and remove the side panel. No tools were needed.

Building a system designed to stand the test of time, and to avoid rebidding government contacts, is a great idea. But it only works if the systems are easy to upgrade, both technically and physically. The Dell OptiPlex 7050 checks both boxes, making it a great candidate for long-term service with any agency.