In the Army, everything is big, including network rationalization efforts.

The service branch kicked off an effort a few weeks ago to update mission command network software and hardware for 400 Army, Army Reserve and Army National Guard units.

As part of the effort, the Army will “reduce the number of disparate software and hardware systems in today’s command-post environment,” according to a press release. The streamlining will last into 2019, the Army says.

The ultimate goal of the effort is to reduce the number of mission command network software and hardware versions in the Army from a dozen down to one. In the end, the Army thinks the networks will be simpler to operate and easier for soldiers to set up and keep running.

“Given the amount of time it takes this organization to fully field [mission command software] to the entire Army, we just couldn’t keep up with the amount of versions that were being demanded by the operational force,” Col. Troy Crosby, the project manager for mission command, tells Federal News Radio.

A Massive Network Upgrade for the Army

As the Army has been continuously deployed for the last 15 years, units have demanded new capabilities, according to Crosby. Multiple, interdependent mission command software versions were deployed at the same time to meet units’ operational requirements. In some cases, software versions were specific to the mission or the region in which the unit was being deployed, the Army says in the press release.

The Army is changing how it puts these systems in the field. Elements from its Program Executive Office Command, Control and Communications-Tactical unit will mobilize to support fielding up to 280 units within the next year and the remainder of the Army in 2019.

This approach will encompass fielding new systems, training units and providing field support where needed, according to the Army.

Federal News Radio reports that the Army is using its standard “unit set fielding” process for the upgrade and streamlining. In that approach, equipment installations and training are handled at one location, the publication notes.

Given the 400 units that need to be upgraded, that process would normally take five years, according to Federal News Radio.

“The accelerated timeline is probably our biggest challenge,” David Meickle, a product support manager with Project Manager Mission Command, told Federal News Radio. “We’re going to need to align the units’ missions — their deployment schedules, exercises, unit rotations, [permanent change of station] moves — and our training. We’ve had a lot of help from Department of the Army headquarters in laying out a feasible schedule, especially when it comes to the National Guard and Reserves actually being available for training, but it’s still a significant challenge.”

The Army has been adding new capabilities and software patches for different network configurations around the globe. Now it wants to simplify and automate the tools so that soldiers can more easily set up infrastructure, install software, and configure and connect it to units around them.

According to the Army press release, there are currently as many as five laptop models and four versions of server stacks across Army tactical units. The upgrade and network rationalization effort will reduce the varieties of tactical laptops and servers to two base lines of common hardware. “This will ultimately enable end users to manage hardware sustainment and warranties more easily, while reducing the hardware footprint in the command post,” the Army says.

A single Army software base line “decreases the number of software patches and security updates that must be developed, tracked and then implemented in the field” and will increase interoperability, the Army says.

A key goal of the simplification effort is to make it easier to train soldiers to manage networks. Niraj Kadakia, the deputy product manager for PM Mission Command’s Strategic Mission Command, told Federal News Radio that the effort should reduce average training time for deployed systems administrators from 80 to 18 hours.

“This effort will not only deliver a better capability, it will also ease Soldiers' training burden when they move to a new duty station or between the echelons from battalion to division,” Crosby says in press release. “By the end of 2019, they will have the same mission command experience with the same version of software, anywhere they are.” 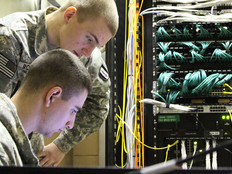