Automation is commonly thought of as an attempt by rich companies to get richer. Instead, it’s often an effort to cut costs when the future of the economy looks bleak. Take, for example, the economic slump of the 1950s. Though 13 million jobs were ultimately destroyed during the decade, an astounding 20 million new ones were created — thanks, in large part, to technological advancements such as automation.

With visions of the next recession already clouding the horizon for many Americans, we can bet on a sweeping wave of automation technology to shake up the workforce once again. Only this time — with technology that’s advanced by leaps and bounds since the ’50s — the disruption will be stronger and reach further than ever before.

Automation Is Expected to Increase Rapidly

A 2011 study evaluated how the Great Recession impacted structural unemployment in the United States. The study’s authors reported that the structural unemployment rate rose by nearly 2 percentage points between the end of 2006 and 2010. It was enough to disrupt industries and permanently alter local economies, but the next recession could be far worse.

Over the past decade, companies have made huge strides in automation. Consider that innovations like self-driving cars, which used to be the stuff of fantasies, are already becoming a reality. As a lesson in history plays out before us, the next recession will cause companies to reach for more cost-cutting automation, which will likely lead to larger job losses than in previous recessions.

The availability and maturity of artificial intelligence and machine learning technologies could be the catalyst for a massive wave of automation in all kinds of industries. In a recession where profits dip and human labor becomes one of a business’s biggest expenses, the incentive for companies to pursue automation will drastically increase.

To make matters worse, automation disproportionately affects economically vulnerable workers because simple, repetitive tasks are the most likely to be automated. Employment will primarily contract in industries such as food service, manufacturing and transportation, where workers struggle to make a living even under ideal employment circumstances.

The good news is that other fields will be starving for employees, but it will take purposeful policy changes to prepare displaced workers.

How the Federal Government Can Respond to Automation

Although most employees understand the need to learn new skills — and data from the Pew Research Center suggests that 49 percent of Americans anticipate reduced job security by 2050 — that doesn’t mean they have access to the resources necessary to pursue new employment avenues. At present, the Organization for Economic Cooperation and Development warns that the employees who need training the most are the least likely to receive it, setting the stage for alarming levels of unemployment.

Governments, however, have the power to quell this growing issue by aiding workers’ growth. Here are two ways they can start:

It’s true that automation has historically created more jobs than it’s eliminated, but it still causes incredible upheaval for the millions of workers who are left looking for new employment. If the federal government wants to reduce the fallout from the next major wave of automation, it must implement training programs that prepare employees for the next chapter in their careers. 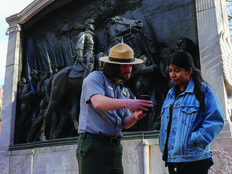