The federal government has been ramping up a new era of shared services, known as Quality Service Management Offices. And although the QSMOs do not yet have a data center component, federal officials envision more shared services for data centers in the future.

Federal agencies could consolidate their data center infrastructure even further by having certain data centers act as shared service providers for others, according to Thomas Santucci, director of the Data Center and Cloud Optimization Initiative Program Management Office at the General Services Administration.

Certain data centers could provide services across agencies, such as archiving or Mainframe as a Service, Santucci says, according to FedScoop. Speaking in mid-May at the 930gov Cloud Computing Conference, Santucci said he was offering his own assessment and that of GSA.

Such shared services would save agencies’ resources and staff and may provide greater efficiencies. For example, Mainframe as a Service could allow agencies to scale up or down mainframe resources as needed. Consolidating government data via cloud and shared services has the “greatest potential” for creating those efficiencies, Santucci said, according to MeriTalk. 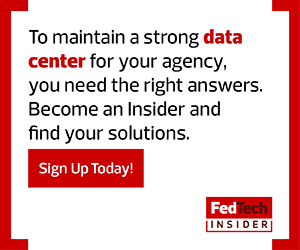 The Benefits of Data Center Consolidation

As of August 2019, 23 of the 24 reported that they had met, or planned to meet, their fiscal year closure goals, and would close 286 facilities in doing so.

The National Defense Authorization Act of 2020 extended DCOI through Oct. 1, 2022. FedScoop notes that 12 have met their data center closure goals and 10 no longer have any data centers at all.

“We want to continue to reduce the inventory mainly because building, maintaining and operating a data center is not in the federal government’s core business,” Santucci said. “Not to mention data centers are energy intensive facilities; they’re 10 to 100 times more energy intensive than any office space.”

Federal agencies are instead relying on private sector partners to help them meet computing demands while managing power and cooling on their own, Santucci said, according to FedScoop. All the while, agencies are continuing to push applications to the cloud and shared services platforms.

“This has the greatest potential for cost savings, increased service delivery or business resiliency,” Santucci said, according to MeriTalk. “Shared services is the cornerstone of data center consolidation.”

The process of rationalizing agency application portfolios has led IT leaders to recognize costs that are not always obvious, “like that edge computing in the downtown building, the network it relies on, and the labor to maintain both IT and the facility to house IT equipment,” Santucci said.

“Some agencies are positioned better than others,” he added, according to MeriTalk. “Agencies that are doing really well are mostly in the cloud with little or no impact.”